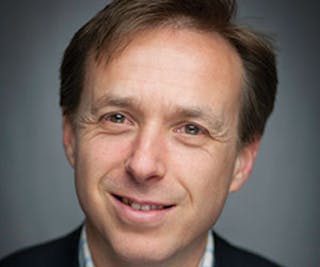 Ollie Leggett is the founder and managing director of IE Design Consultancy, a leading brand strategy, marketing insight and digital solutions provider for the charity, health and education sectors. His role involves leading a team of 26 multidisciplinary workers to produce ‘measurable impact at great value’. IE boasts a clutch of awards won over the past two decades including the Creative Cities Best Brand Award for their own IE brand.

Before founding IE, Ollie worked for four years as both an art and design teacher and a graphic design lecturer. He studied BA (Hons) Visual Communication at Birmingham Polytechnic (now Birmingham City University), graduating in 1989.

He spent 18 months as art director of CityX, a Birmingham listings magazine, before returning to the Polytechnic to study a PGCE in Art and Design, where his placements at Solihull College of Technology and Shireland High School both led to teaching roles. Four years later, he decided to return to working as a designer so gave up his college job to launch IE Design Consultancy while still teaching part-time at the school. One term later, the business had begun to grow, so Ollie left teaching behind to devote all his time to growing the business.

Today IE is a thriving brand, design, digital and marketing agency, employing a team of 26 talented designers, developers, consultants, project managers, marketeers and support staff. It has a turnover well in excess of £1 million a year, with growth rates of over 30 per cent over the past two years.

Ollie is also a trustee of Trident Reach the People Charity – a large, Midlands-based charity which works to improve the lives of vulnerable adults across the region.

I discovered my love for typography and brand storytelling at BCU. I learned my craft and many of the skills I would need to begin and build the business that has become IE.


"As people have joined me, my role has had to evolve from designer to consultant and from manager to business leader. Above all else I'm now the guardian of IE's culture of excellence. It's a long way from visual communication but that's still where my roots lie.