Thanks to the long-term cooperation between the Faculty of Health, Education and Life Sciences, Dalhousie University and Nova Scotia and Nova Scotia Health Authority (NSHA), each year, five Diagnostic Radiography and five Radiotherapy students are offered a once in a lifetime opportunity to travel to Halifax in Canada and experience a different healthcare and culture.

Here is what they thought about their experience:

An opportunity not to be missed 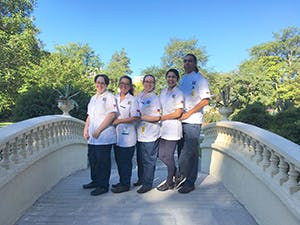 “I was extremely excited by the opportunity to study abroad and Canada was especially exciting. I was delighted and extremely grateful when given a place along with four other students from my course. I also thought that going as part of an organised experience would be reassuring as it was my first time travelling abroad alone.” Tamar Shevah (2017)

“Since I was a teenager I’ve had a keen interest in living and working in Canada which has only grown since I began studying at university. Therefore when the opportunity initially presented itself to participate in an elective placement in Canada through the university I jumped at the chance. The exchange was advertised before Christmas where a written application was required, followed by an interview process from a pool of applicants with the course lead and the organising lecturer, before confirmation of the successful applicants place on the exchange.” Ruth Davies (2017)

What the students enjoyed the most

“I enjoyed seeing differences in our practice compared to the practice of radiographers working in Canada. The people we met were so polite, kind and accommodating, helping us whenever they could, and asking lots of questions about us and what life is like in the UK. I loved the Canadian lifestyle as Canadians are very social and love being outdoors.” Megan Hyett (2017)

“I enjoyed embracing the different working and living culture that exists in Canada. Although similar standards and expectations are upheld in both countries, there is a better working dynamic in Canada with a more equal focus on career and life outside of the hospital. It is something that I hope to bring into my own practice, especially once qualified, as it makes for a better work environment.” Ruth Davies

Differences in professional practice between Canada and the UK 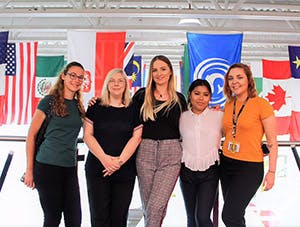 I was interested to learn that the radiographers were expected to do a variety of additional views when x-raying a patient. This made me think that maybe these views aided in the diagnostic process and that perhaps they would be useful to use in certain cases in the UK. However this exposes a patient to a higher radiation dose and therefore implementing this procedure requires a lot of thought.” Tamar Shevah

Professionally in the UK we have more responsibility being a radiographer than our counterparts in Canada.  We have the ability to question the justification of an examination if we feel the need and can refuse to undertake an x-ray if protocols are not met.  In Canada, if a doctor has requested an x-ray then it would seem that the radiographer does not have the authority to question it.

In the UK radiation protection is paramount and are strictly regulated whereas in Canada it would seem that they do not have that same level of monitoring.  We normally carry out 2 views for the majority of x-ray examinations, so I was surprised to find that in Canada they tended to carry out several views per request.  Although at times I did think these extra views were excessive, there were occasions when I felt these additional views added to the information.  I did learn lots of new techniques and carried views that I had not encountered up to now in my UK training."  Claire Evans (2018)

“I feel that I’ve achieved many things from this overseas experience both personally and professionally. The primary gain is that I have built further upon my confidence in my own professional practice as a Student Radiographer and have greatly expanded my confidence in my ability to work under pressure in unfamiliar environments within a new team using unfamiliar equipment.” Ruth Davies

“This experience was eye opening. It improved my communication skills as I was constantly asking questions about the different ways of working. Learning about the differences within the department and within the hospital environment gave me the understanding that the same job can change from country to country and made me aware that my skills were versatile, but also that there isn’t one single way of working or of approaching radiography as a professional discipline.” Tamar Shevah

“Apart from learning new technical skills that will help me in my career, I also feel that by being placed in an environment that was so different from what I had been used to it has increased my confidence in my abilities to deal with whatever circumstances that may arise.” Claire Evans

“Do it. It will be single greatest decision of your life. You will get to see what it’s like to practice in a new environment with varying techniques & explore new cultures. I’d go to say as far as to say the experience was life changing.” Courtney Penn (2017)

Know before you go

“It is extremely important to do your research before you go, to understand how the profession works and what the way of life is like in that country. Make the most of the opportunity, as things like this do not come around often and there is so much you can learn from it. And it is important to remember that you are an ambassador for your profession and the university. But most importantly, have fun!” Megan Hyett

“If you are unsure about whether to go for reasons such as finance, or if you’re nervous about being in another country because of the culture difference and/or language barrier, the main advice I have is to go for it. A little research beforehand is a good way to start. Going to Canada, where the predominant language is English, helped me focus on the professional aspect of the experience rather than worrying about the language barrier.” Tamar Shevah 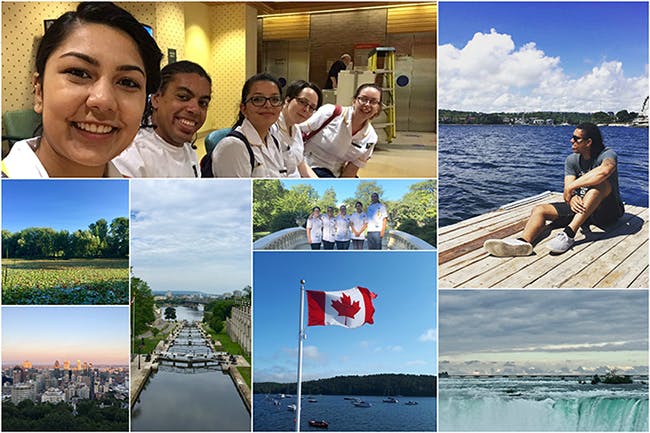