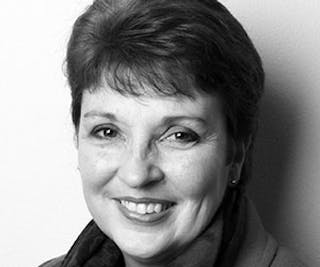 As a human resource director, Jenny Ladbrooke played a key strategic role within a blue chip company – leading the quest to find the most talented people available to give her organisation a competitive advantage.

Jenny gained membership of the Chartered Institute of Personnel and Development after studying at Birmingham Polytechnic (now Birmingham City University). This professional development provided her with the bedrock for a high-flying career with the IMI, a global engineering group focused on precise control with a £2 billion turnover.

After starting as HR officer on a graduate programme, Jenny worked her way to become Group Human Resources Director of IMI. In this top level role Jenny led on finding and developing talented individuals, either within the organisation or from outside.

My main strategic challenge was to help find the ‘talent’ – those people who could reach to the next level to take us forward.”

Jenny said many successful corporations were built on innovations and new products. “The key to continued success is the people you have in the organisation. In the modern, global marketplace things change so dramatically, so quickly, you need the right talent if you are to keep ahead."

Jenny developed her career with IMI - which included regular overseas travel as the organisation continued to globalise and spread with rapidly growing workforces across America, Asia and Continental Europe - with her role as a mum-of-three.

After leaving IMI she now balances her life with a range of roles, offering advice to the third sector and not-for-profit organisations. Two of her main passions are Solihull Job Club where she supports people back into work and acting as a governor for her alma mater, Birmingham City University.

Jenny added: “It has been rewarding to support Birmingham City with its own strategic leadership. It has an equally strong opinion of finding talented people to move the University forward in these fast-changing times.”