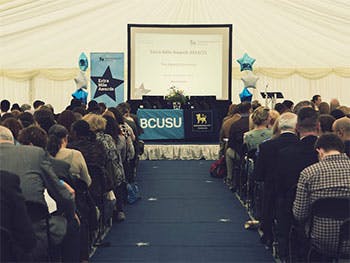 Students and staff from the Faculty of Business, Law and Social Sciences won in four categories at the Extra Mile awards with two others bringing in runner-up prizes.

One of the biggest nights in the University calendar, the Extra Mile Awards are a celebration of the achievements of University staff and students over the course of the year. 2015 saw the largest number of nominations ever received and the biggest turnout for the event.

The ceremony took place outside the Parkside Building at the new City Centre Campus on Wednesday 13 May.

Keith Horton, Executive Dean commented: "Very many congratulations to all of you that were nominated, and especially to those who received awards yesterday evening. A great achievement, and one for us all to be very proud of."

Engaged Student of the Year

Entrepreneurial Student of the Year

Personal Tutor of the Year

Researcher of the Year

Student Academic Leader of the Year

Student in the Community Award