Being the original home of Black Sabbath, Duran Duran, The Streets, UB40, Ocean Colour Scene and a host of other household names, you’d think that Birmingham has a pretty impressive music scene – and you’d be right! We’ve compiled our music guide to Birmingham depending on your preferences so you can see if it hits the right notes.

Formerly the NIA, Arena Birmingham is a versatile venue with a nearly 16,000 capacity and as such it draws big names in music, comedy and entertainment. The best thing is it’s a huge venue right in the City Centre! It’s a short walk from the train station and is surrounded by plenty of bars and restaurants for a pre-show meal.

Check out all their events here.

Nestled among the smaller alternative venues of Digbeth is the O2 Institute. Converted from a Methodist chapel built in the early 1900s, The O2 Institute has been an essential part of live music culture in Birmingham for the past 30 years, the Institute has hosted bands such a Pink Floyd, The Cure and Arctic Monkeys, as well as multiple club nights.  The venue boasts four separate rooms, with space for bigger headliners and smaller emerging bands, there is something to cater for all.

Check out their full listings.

Another Birmingham Branch of O2 Venues is the O2 Academy. A larger venue with some bigger hitters, it’s bound to feature one of your favourite artists.

No bigger than your average living room when you walk through the door but with a surprisingly large and intimate basement venue space, the Sunflower lounge makes for an unforgettable night out. Expect the scuffed-up floorboards and ripped leather sofas of a New York dive bar, and also to hear some of the most promising up and coming acts around. It’s rough, ready, simple and loud and that’s why we love it. With some events showcasing three to four bands for as little as £6 (advance ticket), The Sunflower Lounge is quite possibly the best place to find your new favourite band.

It’s not all live music though; with DJ sets and televised football there’s enough at The Sunflower Lounge to keep everyone happy. Take a look at their upcoming events.

The Grade II listed building houses two fully kitted venues and a stylish downstairs bar area with large Chesterfield sofas and a simple menu. Get in early for a pre-gig Bloody Mary burger and then head on up to see some quality live music. It’s also one of the venues for the famous Mosely Folk Festival, so the musical pedigree of this bar is not to be ignored.

Take a look at their upcoming events.

The Cuban Embassy is a loud and colourful live music venue taking inspiration from the bars of La Habana. It’s got a lot going for it, from the unique and delicious Cuban menu to a selection of 120 boutique rums, the Cuban Embassy is well worth a visit.

The highlight of the Embassy, though, is its six out of seven performances per week.  A selection of resident musicians playing Latin and flamenco beats, as well as house band Rhythms Del Toro covering classic tunes in their own style, will keep you dancing till the early morning. If that’s not your thing, The Cuban Embassy is a rotating gig space for artists both signed and unsigned, with genres spanning indie, R&B, rock and more.

You can see what’s on each day and see a list of upcoming events here. 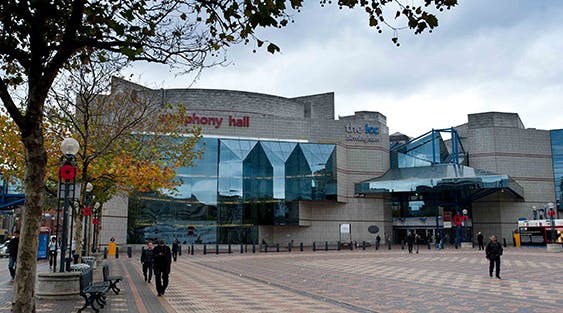 Two classic Birmingham Buildings hosting a range of live music and entertainment, THSH (Town Hall and Symphony Hall) feature everything from classical to rock. Both halls boast incredible acoustics and have played host to acts like David Bowie, Led Zeppelin, foreigner, Travis and more. If you want a night out with a difference why not go and see a classic film with a full symphony orchestra playing the score live? Films like Jaws, Jurassic Park and Indiana Jones have all received the Symphony Hall treatment.

Check out their diverse range of shows.

Situated in the Jewellery Quarter and winner of ‘Best Entertainment Pub’ in the UK for 2015, art bar The Lord Clifden has plenty on offer, but its DJ nights on Friday and Saturday are a particular highlight. With a range of regulars and rotating talents, the Clifden keeps things fresh by hosting disc spinners playing everything from ska to soul.

The inconspicuous frontage hides a multifunctional beer garden with outside bar, DJ booth, ping pong and foosball tables. Events in the summer should not be missed and Saturdays always feature entertainment, like TLC, with Dean ‘Sunshine’ Smith guests spinning disco, funk, house, classics and Balearic beats.

Check out their events.

Named Lab11 because of their penchant for experimentation, the once abandoned warehouse in the bustling heart of Digbeth hosts a series of renowned club nights and specially curated events for the thriving arts and culture scene. With a freshly refurbished outdoor terrace housed under the grand Victorian Viaducts of Digbeth and the stripped back walls of the internal club adorned with the latest lighting and sound installations, you couldn’t want more from a modern club space.

Recently refurbished and full of hidden spaces and new rooms, Lab11 is the last stop for quality emerging DJ talent. Events usually feature a musical menagerie of genres from soul to house and the space receives regular transformation in collaboration with external events from companies like Itchy Feet, 99 Flake, TEKTU, The Acid Experiment and more.

Check out their events.

We also asked students from Royal Birmingham Conservatoire what their favourite live music venues are in the city, and marked them on a map so you can see how much music you can experience away from the campus – and many of the best venues are really close to BCU itself! 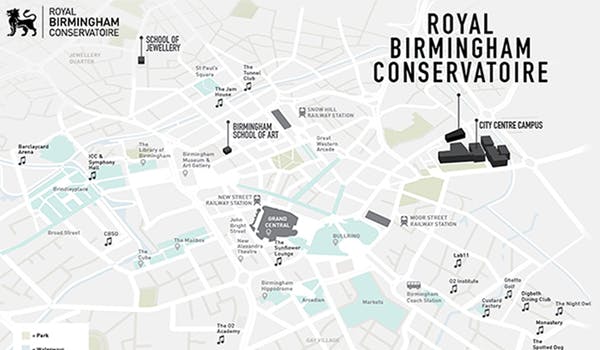