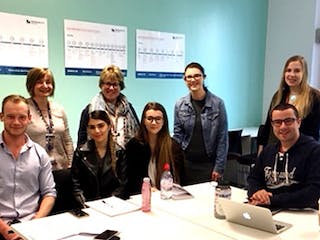 Poor record-keeping by healthcare professionals is a nationwide problem, and has been held at least partly responsible for a number of failures in the healthcare system. Having already produced a training DVD which has been used by a number of NHS Trusts, researchers from our Faculty of Health, Education and Life Sciences have teamed up with the School of Law to develop a more comprehensive teaching resource.

The Nursing and Midwifery Council (NMC) Annual Fitness to Practice Report 2016-17 revealed that poor record-keeping was in the top five complaints received by the NMC. Furthermore, the top two complaints – patient care and prescribing medicine – both encompass aspects of record-keeping, further demonstrating the scale of the problem.

Public enquires have also highlighted the issue. These include the Barry Report (2005), the Francis Report (2013) and the Morecambe Bay Investigation Report (2015). The Morecambe Bay Report, in particular, concluded that many of the failures of clinical care in the maternity unit at Furness General Hospital were attributable to poor-quality record-keeping, including the retrospective completion of records, and inaccurate and interchangeable accounts.

Amanda Andrews and Bernie St Aubyn from the Faculty of Health, Education and Life Sciences have campaigned to improve record-keeping for a number of years. They created a DVD – ‘On the Record’ – that simulates the consequences of poor record-keeping in a litigation setting, which was bought by numerous NHS Trusts for use as a training tool.

The next stage was to collaborate with academics in the University’s School of Law to create an enhanced ‘On the Record’ Virtual Learning Environment (VLE), using expertise from both schools.

To analyse the training needs, experts looked into a previous NMC Conduct and Competence case.  Students from the schools of Nursing and Law were employed to act out the case, which was filmed and edited by a student from the Faculty of Arts, Design and Media. The record-keeping practice of three different nurses was examined in relation to the NMC Code and used as a basis for producing the learning resource.

The joint project resulted in law and nursing students receiving training in the principles of record keeping as well as cross-examination and courtroom advocacy.  The resulting information is now being developed into a comprehensive teaching resource, which will be launched jointly by the two schools. This will be embedded into the relevant courses at the University, and will also be marketed as a resource to external interested parties.