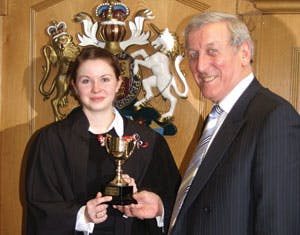 We are one of the most successful mooting societies in England and have enjoyed some dramatic wins in national mooting competitions.

Our students in the Mooting Society have reached five finals over the last few years and have regularly beaten teams from some of the country's most prestigious universities. In the past 10 years, we have beaten eight of the elite Russell Group of universities, which includes Cambridge, Oxford, the University of Birmingham and Warwick.

In October 2014 the Mooting Society organised the School’s first ever “change the world” event, inviting students from across the university to say how they would change the world, for the better or worse. Students offered ideas ranging from ‘bugging’ Parliament to compulsory intelligence tests for election voters.

In November over one hundred students signed up for our Internal Mooting Competition. Over 4 rounds, students battled it out to reach the final, getting to grips with complex arguments related to criminal liability for the reckless transmission of the HIV. The final of the competition was held at the UK Supreme Court and presided over by Supreme Court Justice, Lord Sumption.

To round off this fantastic year of achievement, the Mooting Society will be the focus of a special presentation event where Professor Sue Rivers, Head of the School of Law at Birmingham City University, will present all students who contributed to this success with certificates of excellence.

What former students say about our mooting:

"My participation in the mooting programme was undoubtedly one of the most rewarding experiences of my undergraduate years," she says.

Fraser Coxhill, also a barrister, won the Balloon Debate and went on to win the Internal Mooting competition before successfully representing the Law School in national competitions.

"Mooting provides the opportunity to work as a team, to meet people at various levels and to debate issues on an intellectual level with academics and practicing lawyers," he says.

What the professionals say about our mooting: