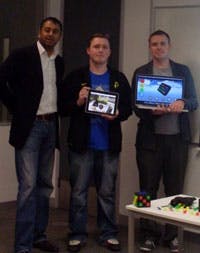 Birmingham City University students have been working with two Dragons’ Den competitors who have developed a game to rival the Rubik’s cube.

Rob Aldridge and Chris Castledine who are BSc Computer Games Technology students are creating an electronic version of a game called Culica, which has been designed by two entrepreneurs, James Eadon and Chris Ollivier. The businessmen, who have presented the game to the panel on BBC’s Dragons’ Den, got in touch with the University because of the students experience of designing and developing video games as part of their course.

Despite being rejected by the Dragons on the final episode of series nine of the programme which was aired on Monday 3 October, the game is already in production and available to buy from the firm’s website. The plastic cube consists of 54 slots, each of which can hold a peg. There are numerous games that can be played using either one cube or several in combination.

James Eadon, who invented the Culica cube said: “Our vision is for Culica to be ranked alongside chess and playing cards as one of the most important and iconic games in history.

“With the help of Rob and Chris from Birmingham City University we have created a 3D video game based on the Culica; the Culica Plasma. These are already available on the Culica Games Store with iPhone / iPad versions imminent.”

Andrew Wilson, Senior Lecturer in the University’s Faculty of Technology, Engineering & the Environment said: “We are very pleased that our students have had the opportunity to collaborate on the Culica game. Seeing James Eadon and Chris Ollivier appear on Dragons’ Den was exciting for both Faculty staff and students, and even though they didn’t gain any funding it was great to see the product getting coverage on TV.”

“We will have other examples of student entrepreneurship on display at our forthcoming open days and are encouraging anyone who wants to find out more about the courses that we offer at the Faculty of Technology, Engineering and the Environment to come to our open days on Friday 7 and Saturday 8 October, 10am-4pm at our campus at Millennium Point.”

For further details about the open days visit http://www.bcu.ac.uk/student-info/open-days