Birmingham City University (BCU) has won the Higher Education Provider of the Year award at this year’s Education Awards, thanks to the University’s continued commitment to providing regional transformation.

An award for widening participation and celebrating diversity

The Education Awards, which took place on Friday 1 July, celebrates and rewards the most outstanding contributors to the education sector.

Its Higher Education Provider of the Year accolade was aimed at institutions that “combine an academic and outstanding widening participation programme, drawing in diverse intake and providing support to students to help them thrive.”

BCU clinched the prestigious accolade thanks to its mission to become the University for Birmingham, enabling personal transformation and ensuring that equality is advanced in the work that they do.

Commitment to equality and inclusivity

The University was victorious thanks to its positive contribution to breaking down barriers and offering higher education opportunities to people from diverse and underrepresented backgrounds.

This has already yielded positive outcomes:

BCU was also highlighted for its partnership with IntoUniversity Education Hub, which saw the opening of IntoUniversity Birmingham North in Kingstanding.

The centre is the first of its kind to be opened in Birmingham and the first in the country to have a special focus on the arts.

Its hard work, facilities and support has resulted in 76 percent of school leavers from the centre progressing into university, compared to 29 percent of young people in the local area. 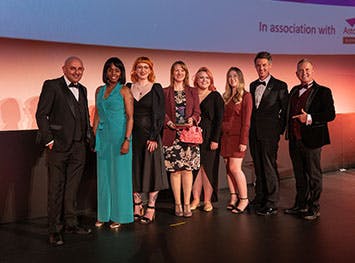 The University was also victorious thanks to the strong support it provides to the region’s businesses, creatives and entrepreneurs, as well as the help it has offered students and graduates in boosting their employability prospects.

This has resulted in 106 graduates securing job placements and 414 securing full-time employment, as well as BCU becoming a Gateway Provider for the Government’s Kickstart scheme, in which the University works with West Midlands Police.

Alongside this, the University has also been recognised for programmes such as:

The University’s STEAMhouse initiative was also praised, namely the support and guidance it offers in order to help its 475+ members grow, the support and facilities its Business Incubator provides to new startups and entrepreneurs, and the work conducted in creating a STEAMhouse counterpart in India.

The night proved to be highly successful for BCU, with the institution also being named as a finalist in the Transforming Lives Through Partnerships category.

It has been a landmark period for BCU in terms of recognition, with the University recently clinching two awards at the AGCAS Awards for Excellence, a national awards ceremony highlighting good practice in higher education.

BCU has also previously been recognised for its commitment to equality and diversity, winning an accolade at the Signature Awards earlier in 2022 for its determination to break down barriers.

Deputy Vice-Chancellor Professor Julian Beer is especially pleased to see that the University’s progress in widening participation is being recognised on a wider scale.

“The University’s mission statement is to be the University for Birmingham, ensuring that equality is advanced in everything we do,” Professor Beer says.

“We are thrilled that our continued commitment to providing a level playing field – where students, staff and professionals within the region can succeed without limitations – is being highlighted in such a way.”