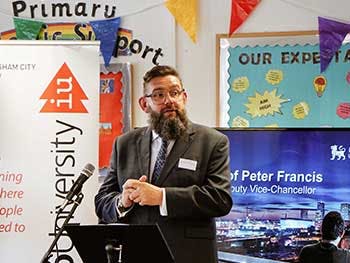 Birmingham City University and national education charity IntoUniversity are celebrating the second anniversary of a partnership aimed at improving access to higher education including for those from disadvantaged backgrounds.

IntoUniversity Birmingham North, an educational support initiative for young people in the Kingstanding area of Birmingham, was set up by the two organisations in 2020.

The programme marked its two-year anniversary with a special event at its base at the Maryvale Community Centre on Monday 20 June.

IntoUniversity forms partnerships with universities to provide young people – particularly those from disadvantaged neighbourhoods – with after-school academic support, mentoring and aspiration-building workshops and trips. The charity works closely with local schools to boost students’ understanding of subjects as well as helping to plan future options.

The charity’s site in Kingstanding is one of 35 learning centres across England and Scotland but was the first of its kind to be opened in Birmingham and the first in the country to have a special focus on the arts. The emphasis on arts-based subjects reflects Birmingham City University’s drive to increase representation across the creative industries, much of which is driven by its dedicated research hub, The Sir Lenny Henry Centre for Media Diversity.

Professor Peter Francis, Deputy Vice-Chancellor (Academic) at Birmingham City University, said: “At Birmingham City University we firmly believe in the transformative effect that higher education can have on people’s lives. Underpinning this philosophy is a commitment to creating opportunity for all, and to enabling every student to be the best they can be. We celebrate the diversity of our student population, many of whom are from the region and first in their family to attend university.

“We recognise that some young people face challenges that can make the goal of attending university harder to attain, and we are immensely proud of our partnership with IntoUniversity and our combined vision to help young people overcome these barriers, and to transition into Higher Education.

Our partnership with IntoUniversity reflects BCU’s commitment to giving young people, whatever their background or personal circumstances, the best possible chance of fulfilling their potential, and we look forward to continuing to work together to change lives.

Despite the challenges the pandemic presented, including school closures, the team of four full-time members of staff, together with tutors from the University and local schools, continued to deliver support sessions for primary and secondary school children in the community.

Some of those students and their families joined this week’s celebration, to showcase the work that they have done on the programme and take part in fun activities including exploring digital art through creating gifs and creating paper plates portraits based on their identities.

Nadhirah, a Year 8 student who has been attending academic support at the centre since it opened spoke about the impact that coming to the centre has had on her: “I recently took part in a creative art workshop during half-term where I was able to express my identity and where I am from, through art. I really like how I can explore who I am at IntoUniversity and it is a really safe place for me.”

They were joined by representatives from IntoUniversity and Birmingham City University, local government officials and members of the community.

Speaking to the guests at the second anniversary celebration, Sophie Lewisohn, Vice-Chair of Trustees at IntoUniversity, said:

IntoUniversity is dedicated to giving young people from the communities in which its centres operate the best chance of attaining a university place or another chosen aspiration.

She continued: “So, it’s wonderful to see and hear about how our Kingstanding centre has helped shape the ambitions of those from the area over the last two years, despite the disruption caused by the pandemic.

“Since the centre opened, we have worked with over 2,200 students in the local community, and last academic year, 76% of school leavers from IntoUniversity Birmingham North progressed to university, compared to 29% of young people in the local area.

“This could not have been achieved without a massive amount of cooperation, so I want to say thank you to Birmingham City University and our partner schools, our staff at the learning centre and most of all to the children who have been coming to the centre since it opened and who have made it such a success.”