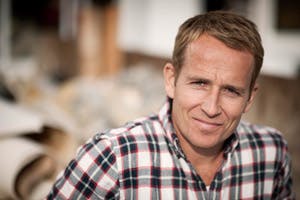 The frontman of TV shows including Channel 4’s ‘A Place in the Sun’ and BBC’s ‘Escape to the Country’ is to be honoured at a Birmingham City University graduation ceremony next week in recognition of his outstanding achievements in the property sector.

After graduating from Birmingham City University (then known as University of Central England) in 1997 with a degree in Estate Management, Jonnie Irwin went on to work in surveying with business transfer specialists Christie and Co, advising on the sale and purchase of businesses from private corner shops to corporate public houses and hotels.

After gaining experience with Christie and Co and taking on the role of Associate Director within three years, Jonnie then went on to join Colliers International, one of the world’s leading real estate companies.

At the age of 30, Leicestershire-born Jonnie was invited to audition for a pilot of Channel 4’s TV programme ‘A Place in the Sun – Home or Away’ and over 200 episodes and nine years later Jonnie still remains as one of the shows presenters today. Jonnie also currently presents BBC’s ‘Escape to the Country’ and ‘Cowboy Trap’ and has previously worked on BBC’s ‘To Buy or Not to Buy’.

Jonnie combines his media career with running a small business and property consultancy and he is also a partner of TakeHome Media, a television development and production company.

He said: “I thoroughly enjoyed my time studying at Birmingham City University. I can say hand on heart that I wouldn’t be working in my current profession if it wasn’t for the staff at the University, which makes it even more of a privilege to receive this honorary doctorate from an institution I hold in such high regard.”

The graduation ceremony in which Jonnie will be receiving his honorary doctorate will take place at the Symphony Hall in Birmingham on Tuesday 12 February.