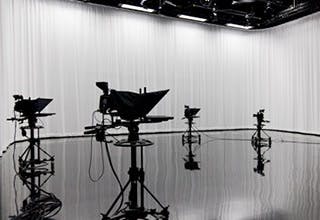 You’ll also find our £4 million purpose-built acting school, complete with 11 studios, including a large performance studio which has set a new benchmark for drama training facilities in the UK, and its own blackbox theatre. Each studio contains specialist acoustic panelling, sprung floors, a heating system that radiates heat equally around the studio and an air replacement system that maintains a constant room temperature. We also have a fully operational lighting rig and quadraphonic sound system.

Our art and design students work from a core of workshops in the centre of the five-floor building, with studio space around them. There is also ‘collision space’ where students and staff from different courses will see each other to pass the time of day, and exchange thoughts and ideas. The design of the atrium embodies this notion, with a central circulation stair encouraging students to move through a series of shared spaces before entering their department.

Birmingham School of Media and English

Studio A is the largest of any University studio in the UK. It could easily accommodate shows like ‘Deal or no Deal’, 'The One Show’ and ‘Newsnight’ to name but a few.

The Parkside Building houses cutting-edge facilities within the "Media Centre", with classroom teaching on the media courses delivered in Millennium Point. There are four TV studios within the Media Centre, along with Studio B/Milo (the ‘green screen’) and all of the studios are interconnected. It’s taken 22km of wire to make that happen! The Media Centre also has four fully broadcast-standard edit suites, based on the industry-standard Avid editing system, and full broadcast-standard dubbing suites based on a multi-layered ProTools desk.

The Curzon Building, which opened in September 2015, is home to our Faculty of Business, Law and Social Sciences.

Facilities housed in the new building include: