Ruth Hogben visited BCU’s Parkside building to speak with Arts, Design and Media students about her career, to answer questions, and to give portfolio advice.

Who is Ruth Hogben?

Ruth Hogben is a filmmaker, who is most notably known for previously working as Lady Gaga’s creative director over a ten-year span. Ruth has also worked with Kim Kardashian, Ariana Grande, Prince, and many more artists. Her strong creative eye and technical abilities have allowed her to work on a plethora of projects, making her the perfect person to speak with our students.

Joe Miles, Senior Lecturer in Photography and Moving Image, said: “It was an amazing experience for our students to hear from someone who is genuinely a world-leader in their field. Ruth Hogben’s advice and insight into the creative industry was invaluable and her stories about the likes of Lady Gaga, Kanye West and Jay-Z made it all the more fascinating.”

Why it was insightful and beneficial to students

During the talk, Ruth gave a breakdown of her work, with a timeline of where she started to where she’s ended up today, with all of the highs and lows she had in between. Fashion Branding and Communication student, Rebecca Sleigh, said:

“The talk really conveyed how much of a hard worker she is, which made me want to step up my game.

Student Oliwia Lelek said: “I appreciate the fact she mentioned that she was shy, which was inspiring because she mentioned that she has to work with and manage hundreds of people, which must have been hard and daunting for her but she overcame it. It was beneficial to know that you don’t have to be completely extroverted and flamboyant to succeed in such a role." 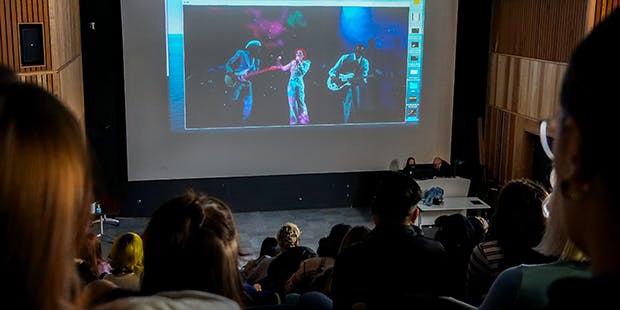 “Ruth emphasised how important it was to work your way up in the industry, starting small but having big dreams.

“The level she is at seemed so impossible to reach initially, but hearing her talk about all of the hard work she’s put in and the perseverance she has had to make it to the top, it made me realise that I could be like that too, if I put my mind to it.

“She explained that production assisting is a vital role, especially as a stepping stone in your career, and to appreciate the experience while you’re doing it and not taking it for granted”.

“The advice I took away from the talk was to go for it and send people your work! She mentioned that she used to send her portfolio and work to people constantly until she got recognised! It made me want to be more motivated to put myself out there.”

“Ruth also explained that she is never satisfied with a creative brief that she is given and always aims to put her own flair on a project, building on other’s ideas to level them up.”

After the talk, Ruth took the time to speak with students on a one-to-one basis, and even reviewed the portfolios of those who wanted feedback.

Find out more about our Open Days

Our Open Days provide you with the perfect opportunity to discover just what we have to offer.

Seven weeks in a South of France Chateau; my unique industry placement

The 'new normal' is crisis

How I secured a scholarship in Morocco and became a visiting tutor aft...