Luke felt the tube map looked ‘too cluttered’ so he redesigned it with smoother lines and a new colour scheme to make it easier for users to read. His design caught the attention of several media outlets and was featured on the radio and on multiple newspapers and websites.

We caught up with Luke to find out more about the project and what else he has been up to since graduating.

Can you tell us about your journey since graduation? 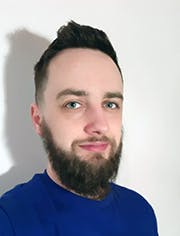 Shortly before graduation I moved down to London to work for an advertising agency, I gained a great deal of knowledge but ultimately the city wasn't for me (paying out the nose to live with strangers and be crushed on a tube carriage twice a day wasn't as good as it seemed) although of course it was useful for getting to know the London tube network! In late 2017 I moved back to Birmingham to take a midweight agency position, and a few weeks ago I started a new in-house job for a tech company. Mostly I work on design, branding, advertising, video, animation and information design.

What did you enjoy most about being a freelance graphic designer?

I loved going to different agencies and gaining all sorts of experiences. Every business operates slightly differently and it was really good to see those differences. Constantly meeting new people and being able to decide on your own hours is ideal, provided you can secure enough work to avoid any financial worries.

What is your proudest achievement to date?

Probably re-designing the London underground map! The reaction to my redesign has been beyond anything I could imagine, all I did was post my little hobby project online for some feedback and now a few weeks later I've been featured on the radio and on multiple newspapers and websites. I had no idea I'd get this kind of reaction or that so much interest would be generated, so I am very proud of how this project has turned out.

What has been the most enjoyable project you’ve worked on so far?

Late last year BBC Coventry and Warwickshire ran a competition to design a city flag for Coventry, my home town. While this is non-commercial work I really enjoyed the process, I view vexillology (flag design) as one of the purest forms of graphic design, as certain imagery must be portrayed with a great number of limitations placed on the designer. I enjoyed the challenge and my submission (see below) was chosen from hundreds of entries as one of the six to go to a public vote. While unfortunately I didn't win I made a nice piece of design and gained another case study for my website.

Why did you choose to study at BCU?

I chose BCU because of the brilliant Brum student culture and the Parkside facilities. I was among the first year to study in the new building and that really helped my development.

Did your studies help to prepare you for your current role?

The lectures I had at BCU were pivotal in the designer I have become, particularly Brian Shepphard, who's knowledge of the advertising industry was incredibly useful, and John Lowe, who's passion inspired mine and who encouraged me to make the jump to London after graduating. At BCU I had the opportunity to learn and develop anything I wanted, the 24/7 library nights and especially student agency, where we worked on real briefs under the supervision of the lecturers, were brilliant.

Students kick off first year with a Magical Mystery Tour

Why study BA Illustration at BCU?