Collaboration is a key part of many creative projects and something we encourage across all of the courses that are part of our Faculty of Arts, Design and Media.

Final-year School of Visual Communication students were given the opportunity to collaborate with Gloria Yehilevsky, a music student from Royal Birmingham Conservatoire on a live project.

Gloria initially approached Tracy Allanson-Smith, a Lecturer for BA (Hons) Graphic Communication, as she was interested in creating a website to share everything she does as a musician whilst encompassing her uniqueness and wanted some guidance on the branding aspects of it. It was decided that this could be a great live project for final-year students, so Gloria presented a briefing to about the website to students, which included her vision for the branding, some short videos of her performances and a live short snare drum piece.

She wanted the website to emphasise her general musical philosophy, music as a form of communication, whilst encompassing her breadth as a musician. Gloria composes and performs percussion (solo and ensemble) that is both improvised and prepared, with a focus on contemporary music (experimental, abstract music mostly by living composers), and also teaches.

A number of students took up the brief and Gloria ended up chosing Sam Myles’ design for the brand. She provided feedback on his designs and asked for additional materials and they worked together to put together the final branding. Gloria put the content for the website together and Sam gave advice and suggestions towards the overall appearance of the site and developed the majority of the visual elements. 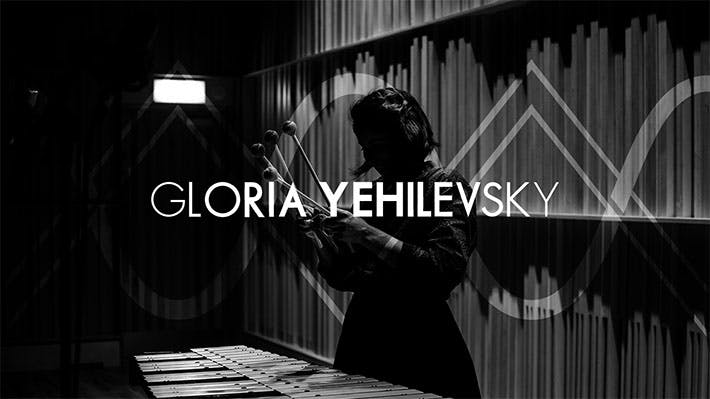 I chose Sam’s design because it was clean, clear and very cohesive. One thing I especially liked about it is that it leaned towards reflecting me as a human being much more than it directly incorporated musical elements/references
Gloria Yehilevsky

As well as the collaboration with Sam, Gloria has also since worked with Shiy Li, an MA Visual Communication student specialising in animation. They curated a project called ‘Minister of Loneliness’, which includes an animation from Shiyi, illustrator Mengxia Liu and collage artist Dingli Yang, and original music from Gloria.

Meet the Head of Visual Communication

What can I do with a Visual Communication degree?