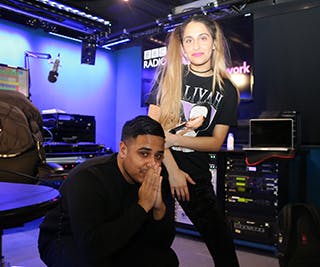 Former School of Media student, Hardeep Dhadda, answered a few questions for us about her time at Birmingham City University and what she has been doing since she graduated in 2015.

I found that a lot of university’s media courses focused on journalism or TV, but at BCU it was different, there were a lot of options – events, photography, TV, journalism, radio, photography, design and web.

At the time of starting the course I was a pretty confused 20-year-old. I knew I wanted to work in media, I liked radio but I didn’t want to commit to something so having options allowed me to explore all the different areas.

I was also looking for a course that was a good balance of theory and practical – after reading lots of textbooks in school and sixth form, I actually wanted to learn the skills I’d need in the industry instead of reading about them.

I always knew I liked radio, but I wasn’t 100 per cent certain that would be the field I would go into. Even radio has so many different areas you could work in, during university I did the radio documentaries module for example – that gave me a chance to really work on my story-telling skills. It wasn’t something I would have thought excited me, but I found it fun.

I learnt a lot about the basics of radio, communicating messages, getting a point across in a succinct way, marketing and branding, and things like that. It’s made me quite savvy and I know I’ve learnt a lot of skills that are now useful in my career. I think three years at university gave me time to perfect my craft, which is not something you can always do on the job when you have time restrictions and other restraints.

Definitely, I did placements at Sky, BBC Radio One & 1Xtra, Free Radio, Genting Arena and more. Without these I wouldn’t know what it is actually like to work in environments like this. You can say you want to work somewhere, the idea of it might sound appealing, but you don’t know the actual day-to-day tasks that go into making that happen if you don’t actually go out there and do it. They were useful because they showed me where I wanted to be and where I didn’t want to be – they were inspiring too.

Currently I’m a producer at BBC Asian Network. Since I left university, I have worked on over 16 different programmes across BBC Radio One, Two, 1Xtra and Asian Network. I’ve also made my own radio documentary, launched brand new presenters and worked with some seasoned ones too.

Just relax and enjoy your time at university. Get really involved in all the Welcome Week activities, you might not get these opportunities after you finish university and have a job.

In May 2018, I helped launch a brand-new residency show on BBC Asian Network – this gave me the chance to work with four massively talented DJs with varying degrees of radio experience. Launching these new shows were fun – I got to work with four unique personalities and see what their individual unique selling points were, that’s got a lot to do with marketing and branding and trying to work out who they are and what they would sound like on-air. It also involved brainstorming feature ideas for their shows and making some fun little jingles.