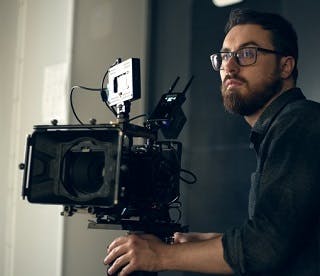 Ash Connaughton spoke to us about his career as a freelance Director of Photography, having graduated in 2017 from the BA Media and Communication, specialising in Television.

What was your first job after graduating?

I dived into freelancing as soon as I left, having worked as a runner while I was still at university, so when I graduated I had already progressed to camera assistant roles on a variety of projects for different people and companies. My first shoot after graduation was actually focus pulling on an indie music video. My second job was as a camera trainee on a big commercial for Muller yoghurts on the Team GB adverts.

Was it difficult to find that job?

It was relatively easy, as I’d already done a lot of groundwork while at university; i.e. getting experience, working as a runner and networking! By the time I left university I was pretty experienced and well rounded. The music video job came from a Director of Photography I’d met while at university and established a relationship with. The Muller commercial came from a contact I met at university who put me in touch with a diary service who were helping to crew that job. I stayed with that diary service until I stopped Assistant Camera work.

What research and preparation did you do to help get that job?

I networked, gained plenty of experience and learnt on the job.

What did the job involve?

As a freelancer you have to manage your own workload and time, network and make new contacts, as well as getting your name out there! On the indie music video I was the focus puller, so for the most part I ran the camera department under instruction from the Director of Photography, as well as the obvious (keeping the shots in focus). Another thing is to take up any work offered, even if it's not your speciality, as any work done for someone for free could lead to potential paid work in the future - favours are always remembered. For the Muller commercial I was a camera trainee, so that involved lugging kit, bringing refreshments to the other members of camera department, changing cards and batteries and running them between charging stations and the Digital Imaging Technician for data backup.

How did University prepare you for work?

University taught me the basics and gave me research and writing skills that I didn’t already have. In terms of preparing me for a career in camera department, I really learnt that on the job once I took up roles in the industry.

Looking back on University, what was the most useful module as far as your career is concerned?

At what point, when you were a student, did you start thinking about and planning your career?

I think it was when I was in college doing a level 3 BTEC and then HND.

What training or further study did you need after University?

I mostly learnt on the job, and I’d say that you need to constantly learn, don’t rely on university to teach you everything. University is great for the basics and networking, but to truly master your craft takes years of constant learning and improvement in the industry. Further professional training/study can be useful, but it really depends on what exactly you want to do. For example if you want to become a Steadicam operator then definitely look into training from somewhere like Tiffen.

Is your career what you imagined it would be when you were at university?

Yes, I knew a lot about the industry as I was already working while at university, so there weren’t any big surprises when I left.

What jobs have you done since graduating?

I’m freelance, so I do a variety of different jobs rather than working for one company. I started as an Assistant Camera Operator, doing bits of focus puller work and clapper loading, as well as a Camera Trainee on larger productions. Then after a couple of years I moved more into Director of Photography work while doing Colourist, Gaffer and Operator jobs too.

What advice would you give current students about preparing for work?

NETWORK. Ultimately it's who you know that gets you jobs, so get out there, meet people, work as a runner, work hard and network some more.