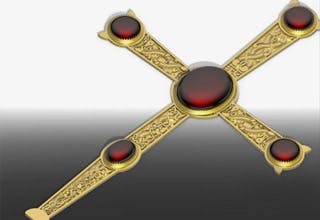 The Jewellery Industry Innovation Centre (JIIC) was approached by Birmingham Museum and Art Gallery, on behalf of Birmingham City Council, with a request to urgently explore the possibilities for creating a copy of a “religious artefact” found among the Staffordshire Hoard for an “important visitor” to the city.

The timescale was short, the budget was tight and, due to security concerns, the identity of the visitor could not be revealed at that stage. The council had also requested that the item should be made exclusively in Birmingham, if at all possible.

It was clear from the outset that the JIIC needed to find a local Silversmith of considerable ability and application; initial enquiries with some of the larger local Silversmithing firms drew a disappointing blank as the peak Christmas manufacturing and trading period was rapidly approaching for them and order books were full.

The JIIC then approached Shona Marsh, already a renowned young local Silversmith who trained at the School of Jewellery, and had recently been teaching there as an occasional guest tutor, thus passing on some of her skills and insights to the latest crop of budding jewellers and silversmiths.

Shona was commissioned as the Silversmith with the JIIC acting as the overall project managers aiding and assisting Shona, especially with technical input.

Mark Watkins, one of the JIIC CAD team set to working with the images, sketches, dimensions and notes taken from viewing the cross at the museum and then made further occasional return visits to the museum to produce, within a few days, a three-dimensional CAD image or interpretation of what we felt the unfolded cross would have looked like, this image was to be as accurate visually and dimensionally as possible.

Different CAD programmes available at the JIIC were used including Rhino, JewelCad, and Solid Works and the resultant images were quickly distributed to BMAG and Shona for approval or suggested amendments. The JIIC also had access to some “artists impressions‟ of the unfolded cross which had recently been commissioned by the museum.

Birmingham Museums Trust is one of the largest local authority museum services in England. There are over 500,000 objects in its collections, dating from 200,000 years ago to the present, and originating from each of the world’s continents.

Birmingham Museum and Art Gallery, in the city centre, is home to one of the world's finest collections of Pre-Raphaelite art, as well as extensive collections of fine and applied art, social history, archaeology and ethnography. In other parts of the city are eight more museums, showcasing everything from the city’s thriving jewellery heritage to its stately Jacobean past.

The Staffordshire Hoard represents a unique opportunity for Birmingham and the West Midlands. The Innovation Centre’s creativity, technological skills and knowledge have enabled us to ‘re-create’ items from the Hoard for the benefit and enjoyment of the visitors and informed the ongoing research.

The JIIC made replicas of the Staffordshire Hoard folded cross, in its projected, probable and undamaged condition, for Birmingham Museum and Art Gallery and the Potteries Museum, Stoke and has also worked with conservators at BMAG to recreate a pectoral cross from the Hoard Collection for Lichfield Cathedral

The JIIC is in discussion with BMAG regarding the production of further replicas, including digital representations of items from the Staffordshire Hoard and has also embarked on a reproduction project with the Millennium Point Museum (Think Tank) to laser scan and produce replicas of items for them.