10 Things You Didn't Know About the Jewellery Quarter

Our School of Jewellery is located over 3 sites in Birmingham’s famous Jewellery Quarter, nestled amongst a thriving jewellery trade and a whole host of buildings that tell the story of the Quarter’s captivating heritage. Check out just a few of those hidden gems…

1. In 1780, there were just 28 jewellers recorded in city, rising to 400 just 20 years later. In the 19th century, Birmingham was the birthplace of the industrial revolution with factories, workshops and crafts springing up all over, leading the city to become known as ‘the workshop of the world’. In it’s heyday in 1913, over 30,000 people were employed in Birmingham’s jewellery trade.

2. Despite the decline in industry, jewellery is still a big part of Birmingham’s present and future with approximately 700 jewellers working in the area, manufacturing around 40% of the UK’s jewellery output. And the Assay Office is as busy as ever, with approximately 12 million items hallmarked every year.

3. Each city’s Assay Office has a different hallmarking symbol so items can be traced back to their maker and in Birmingham, it’s an anchor. But, in a city miles from the sea, why an anchor? It’s said that Matthew Boulton, owner of the Soho Works and co-founder of the Lunar Society, successfully lobbied the government to establish Assay Offices in Birmingham and Sheffield to save manufacturers lugging their items to the nearest office in Chester. While in London, Boulton stayed at the Crown & Anchor Tavern and it’s thought the decision was made on the flip of a coin. Sheffield took the crown (later changed a rose) for its hallmark and Birmingham adopted the anchor.

4. Packed with important heritage sites, the Jewellery Quarter has over two hundred listed buildings and over half of them are jewellers.

5. And it’s not all about beautiful jewellery! During the 19th century, the Jewellery Quarter was home to about 100 pen factories where the average employee could cut out 28,000 steel pen nibs each day. At that rate, it’s no surprise that Birmingham produced 75% of the world’s pen nibs. 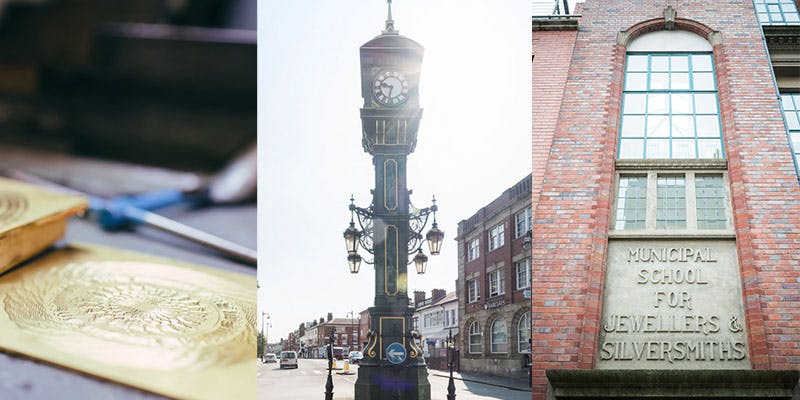 6. The Quarter has a long tradition of producing sporting trophies including the awards for PFA and FIFA World Player of the Year, Lonsdale boxing champion belts and both the Men’s and Women’s Wimbledon singles trophies. Martin, Hall & Co. made the original FA cup trophy known as the ‘little tin idol’. Sadly the trophy was stolen from a shop window in the city in 1895 when it was on display courtesy of winners Aston Villa and was never seen again.

7. The silversmiths of Birmingham have been busy over the years, producing all sorts of items including whistles. In fact, the first ever police whistle, the first football referee’s whistle and the whistles used on the S.S. Titanic were made here.

8. There are royal connections too! The Queen’s Birthday Honours medals were made right here in the Jewellery Quarter.

9. American author, Washington Irving, wrote his famous story Rip Van Winkle while staying here in the Jewellery Quarter. When visiting his brother-in-law, Henry Van Wart, who had opened a trading firm, the two men reminisced about their childhoods. Inspired by their conversation, Irving wrote all night and presented the first draft of Rip Van Winkle to the family over breakfast.

10. The Quarter’s two cemeteries, Key Hill and Warstone Lane, are the final resting places of some of the great and good of Birmingham. Graves include Marie Bethell Beauclerc, England’s first female newspaper reporter, Alfred Bird of Bird’s Custard fame, and Harry gem, co-creator of Lawn Tennis

Find out more about courses at the School of Jewellery

Why you should study Jewellery in Birmingham

What You’d Normally Find in the All That Glitters Studio