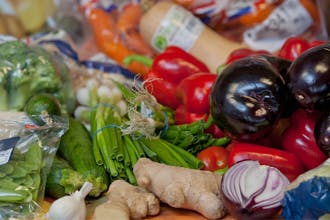 If there’s one thing Birmingham can boast about it’s the great variety of food the city has to offer.

There are lots of new tastes to try out which can be quite different from what you’re used to at home.

There are also lots of places to buy food from. It's important that you eat regularly and take good care of yourself.

You’ll find plenty of shops close to our campuses. The City Centre campus is in the middle of the city close to markets and the Chinese quarter. The City South Campus is also close to the City Centre. Our City North Campus has, including two large supermarkets nearby - Asda and Tesco - and a large shopping centre called One Stop.

Large supermarkets often stay open on a 24-hour basis during the week, with reduced opening times at weekends.

It’s often best to explore a new city in the daytime. At the end of June it starts to get dark at about 9.30pm, and at around 7.30pm in September.

9 - 5 In general shops in the UK are open between 9am and 5pm. You may find some shops are closed on a Sunday.

If you arrive in the UK after 5pm it may be best to buy food and other essentials at the airport so that you have something to eat later.

There are lots of excellent takeaways across the city where you can buy foods such as pizza, curry, Chinese, and a whole lot more. There are two main websites where you can pay online for takeaway food and have it delivered:

Birmingham is full of restaurants and cafes offering all types of cuisine from around the world.

You can try traditional British food in most pubs and bars, and there are lots of restaurants catering to French, Italian and Spanish tastes.

Asian cuisine is very popular in the UK and Birmingham has some of the best Indian, Chinese and Thai restaurants in the country. Trip Adviser is a good place to start if you want to find out where is good to eat.

Places to eat in Birmingham

Variety is the spice of life

If you’re looking for ingredients and food for your own cooking you’ve come to the right place.
There are a wide range of food stores across the city selling most ingredients you could want. You’ll find many of these at Birmingham food market, close to the Bullring shopping centre, which sells a great selection of fruit and vegetables, seafood and meat.

There are Chinese food stores in the Chinese quarter, and across the city you can find many other stores selling country-specific ingredients such as Polish, Indian, Caribbean, Italian and Turkish.

In the UK people can drink alcohol from the age of 18 and you may be asked to show identification (ID).

It’s a good idea to take ID if you’re going out and plan to have a drink. Don’t forget to be careful with your passport if you choose to carry it with you.