While discussing bell hooks’ work in critical pedagogy, a colleague and I had some important discussions with students where we engaged with the topic of slavery and how widespread it was in history. In this blog, 'Decolonising Seminar Discussions on Slavery – an Example of Pedagogical Hope in HE', I reflect on the opportunities in decolonising the HE curriculum when such discussions take place cross-culturally in the classroom.

In the seminar discussion, our students raised the issue whether topics such as slavery should be delivered in education by people of white ethnicity. I made the point that such critical issues should be discussed in a collaborative atmosphere by people of all ethnic backgrounds. There was a point made by a white colleague whether them making points such as slavery existed in all societies, not just in Europe, would go down well amongst students who were predominantly non-white and African and Asian descent. In the discussion on the horrific transatlantic slave trade, I took the informal moderator role of the discussion between students and a white colleague. After the session, I presented the following account from my own desk research to the students on the prevalence of slavery around the world through time. I collected some hard-facts and some controversial points part so the society may ponder on, for instance, that Europeans themselves became victims of slavery at the hands of people from other parts of the world. But it was also important to put the same points into context as the informal moderator in the discussion and also as someone with the shared non-white ethnicity.

It seems slavery has been common in many societies including Europe, North America, and North Africa but many researchers discussed below agree that the transatlantic slave trade was far the biggest, the most well-organised historical crime. Unlike other inhumane slavery activities, for example by North Africans, the transatlantic specifically targeted racially at Black Africans. The North African slave masters targeted both Black and White people.

Jess Mio of University of Auckland in their research establishes that the transatlantic slave trade enslaved more than 12 million Africans, many of whom lost their lives in violent raids and during transportation. The difference between these acts of slavery and other similar acts by slavers in North Africa was the North Africans enslaved people across ethnicities (White and Black) and religions: African, black and non-Christian people as well, so it's false to present such slavery as similarly racialized except against Whites, and as distinct from the trade of black slaves. At the same time, Rory Carroll and author correspondent for The Guardian clarifies that although the black Africans enslaved and shipped to the Americas over four centuries outnumbered estimates of white Europeans taken to Africa by 12-1, it is probable they shared the same grim conditions. According to Prof. Robert Davis, after all, “Slaves were still slaves, whether they are black or white, and whether they suffered in America or North Africa.” Yet, Davis was clear that the fact that some white Europeans were slaves did not mitigate or diminish the enslavement of 10 to 12 million black Africans who were brought to the Americas. Professor Davis’ work is where some rather malevolent perspectives emerge, one of which is Faith Slavery: Davis claims that some people have begun taking one of his findings in one of his books (about the number of Christians enslaved by Muslims) out of context using it for their political racialised agenda. He observes that that his follow-up book took less interest in European audiences because the second book included facts about 1 million North African Muslims taken as slaves by European Christians; local Protestants and Orthodox Christians enslaved by local Catholics and Jews who were enslaved on both sides of the struggle. He emphasises that the number in the transatlantic trades of African people exceeded 12 million but "two such enormous wrongs don’t make anything right.”

From a critical pedagogy point of view, what was also true about the African slaves in North America was that they were oppressed at a system level across whole generations, denying slave victims and their families basic rights such as education, other public services such as access to transport, housing and employment. For example, in 1740 South Carolina passed one of the earliest laws prohibiting teaching a slave to read or write. These were examples of institutional racism against people of African origin in education. This institutionalised racism was what distinguished it from other horrific slave activities around the world - probably why it's still difficult to tackle racism because of its institutionalised nature in societies.

In our follow-up discussion after the above article was shared, we considered the points that that all slavery is equally horrific regardless of where and when it happens and highlighted the particularly institutionalised and racist nature of the transatlantic slave trade. 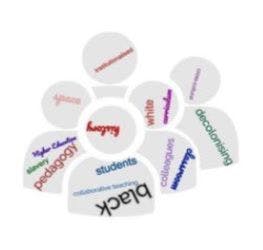 The fact that discussions such as this are taking place across ethnicities in HE is a success for critical pedagogy, which advocates students discussing these issues with staff across cultures and ethnicities as part of their curriculum because the issues matter to students and society (hooks, 2015; ). This is indeed taking action in decolonising the HE curriculum, a concept which I view as being on a par with all critical anti-hegemonic, anti-colonial steps such as hooks’ challenge to Freire’s refusal to invite her to one of his lectures; Rosa Parks’ refusal to give her bus seat, Palestinians’ refusal to stand aside during home demolitions and Mandela’s relentless determination in challenge Apartheid. Where we have a greater chance of hope of achieving successful pedagogic space is when conversations are non-patriarchal, non-supremacist and at the same time, taking place amidst faith backgrounds and ethnicities.