University handed £70,000 boost to create next generation of computing specialists 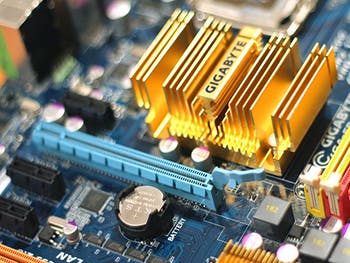 A government-backed £70,000 scheme to create a new generation of computer programmers in the West Midlands has been officially launched.

Birmingham City University has been chosen as the region’s provider for the government’s Computing at School initiative, which aims to get more children and young people interested in computer science to help tackle the UK’s lack of qualified professionals.

The University has been handed a £72,000 grant to serve as one of 10 specialist centres in the country over the next three years to help schools based in Birmingham, Solihull, Coventry, the Black Country and surrounding areas.

Staff will train dozens of school teachers in how to equip pupils with a range of computing skills from coding to games development.

The project highlights the fact that since computer science was added to the National Curriculum in 2015, many primary and secondary teachers have been tasked with teaching the subject without any formal knowledge, training or qualifications.

The scheme aims to give teachers the knowledge and skills needed to support thousands of children aged five to 16, in Birmingham, the Black Country, Coventry and Solihull now being taught computer science at school.

Duncan Maidens, Senior Technologist at Birmingham City University, said: “Historically when we think about education and computers it has always been software based learning, with programmes and packages like Microsoft Office.

“Increasingly young people are picking up general IT skills through everyday life and regular computer use, but what is still overlooked is the need to know what is actually happening inside the machines.

“We train teachers in things like decomposition, abstraction and algorithmic thinking. Whilst these sound scary terms it is basically breaking a problem down, removing the irrelevant information and sequencing the tasks, all of which are used in solving everyday problems.”

Children of today will increasingly be employed in jobs that use design or technology and a better understanding of it at an early age will equip them for tomorrow's digital world today.”
Duncan Maidens

To help sharpen young people’s skills specialist equipment has been handed out to schools, including basic, programmable computer chips such as the BBC Microbit or the Raspberry Pi.

Computing at School was created in response to a report titled Shut Down or Restart which highlighted that computer literacy had a ‘significant’ contribution to the United Kingdom’s economy.

Ten training hubs have been set up across the country including Birmingham City University which was selected after beating off competition from dozens of other training providers across the West Midlands.

Teachers are being invited to attend a series of workshops at the University which will explain the project, beginning with a session aimed at headteachers on Thursday 28 April.