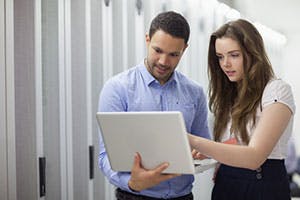 Birmingham City University played host as a centre for Young Rewired State's (YRS) Festival of Code last month, which saw a group of under 19s from the Midlands challenged to address real world problems through their self-taught hacking skills.

The Festival of Code is an annual event encouraging young talent to create innovative technology applications.

The youngsters were supported by Ardavan and his team, along with YRS mentors; they were given time and space to think about their ideas, develop working groups and work with coding programmes to develop their ideas. The group was a mixed group with some very experienced young coders and also less experienced coders who were able to learn from each other.

The Festival of Code took place across the UK in July and culminated with a grand finale weekend in Plymouth, whereby each of the centres’ young coder groups presented their new projects to a panel of industry experts and influencers who are spearheading coding across the country.

One of the Birmingham City University groups have made it to the final three in the ‘Best Design’ category for their ‘SongSurge’ website. The website was developed during one week by a team of under 16 young enthusiastic coders, including Tim Stallard, Lewis Wickes, Jasmine Sandhar and Dhaksha Vivekanandan.

SongSurge helps users to discover music based on popularity, as well as introducing users to news songs and music. The ‘Best Design’ category is now open for public vote.

The annual Festival of Code is organised by Young Rewired State, a not-for-profit organisation, whose aim it is to find and foster every young person with a love of coding and a determination to teach themselves technological skills. The young people taking part in the Festival are supported by Young Rewired State’s team of experts to help them create websites, prototypes and inventive applications, alongside peers with the same passion for coding.

The week proved that with the support of Young Rewired State and by working alongside like-minded peers, the youngsters could confront everyday problems and create viable solutions.

Charmaine Stint, YRS host centre co-ordinator at Birmingham City University said: “We’re delighted to have been able to open the doors of our University this summer to host the Festival of Code. This really is a fantastic event, and an invaluable one in giving the next generation a voice and helping to harness their skills for the future.”