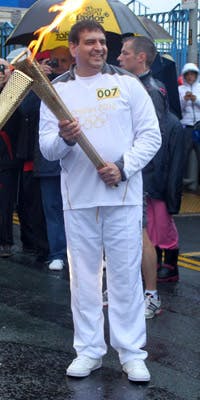 A computer networking academic from Birmingham City University set the streets of Manchester alight last weekend after being selected as a Torchbearer for the Olympic Torch Relay.

Mak, 51, from Wolverhampton, was nominated to be a Torchbearer by international leading networking company, Cisco, following the success of Birmingham City University’s partnership with Cisco which has been instrumental in the employment success of graduates.

Mak, who teaches at the Faculty of Technology, Engineering and the Environment, joined Birmingham City University over 20 years ago and has worked on a number of projects with some of the biggest names in IT. He said: “It is important to have solid relationships with key companies so that we can build a brilliant future for the learners of today that will be the leaders of tomorrow.”

“I am honoured that the Olympic Committee selected me as a Torchbearer for my hard work with thousands of Computer Networking students over the last decade and I’m very thankful to Cisco for nominating me and recognising the impact that my team and I have had.”

Mak was cheered on by his wife and two children, as well as a group of friends, as he carried the Torch through Trafford just after 6am on Sunday.

Video footage of Mak carrying the torch can be viewed here.