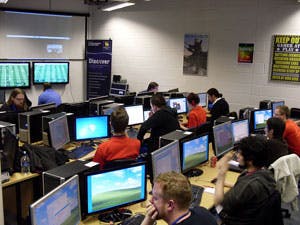 Wannabe games developers are being told to forget Valentines Day and are being invited to go speed dating – with a difference.
Birmingham City University is holding an event for students to meet games professionals in order to gain an insight into the industry and impress potential employers.

Called Game On, it’s being held at the University’s site at Millennium Point in Birmingham city centre on Wednesday 23 February. There will be six professionals attending who represent both independent and mainstream studios from across the West Midlands such as BlitzGameStudios in Leamington Spa and 3dnative in Walsall.

Each student attending will have 15-20 minutes to sit down with an employer and ask questions about how the industry works and get tips on getting their foot on the ladder of a dream job in gaming.

Neil Holmes, who is a producer for Blitz 1UP, is one of the industry professionals who will be attending Game On to answer questions and provide advice. He said: “It’s always encouraging to see universities directly partner with development studios to bring up-to-date and realistic information to their students. Earlier this month a study, the Livingstone-Hope Skills ‘Next Gen’ report, was released which stated that the games industry struggles to recruit graduate developers with the right blend of high quality skills and a professional attitude. Events such as Game On and the recent Global Game Jam allow students to directly access industry insiders and ask relevant questions; initiatives such as the Blitz Academy careers website back up the quality of information and guidance available to both staff and students.”

Also attending will be John Terle of MD RAW Games and Jude Ower of Playmob. John said: “Working in games development is hugely exciting and rewarding. Getting into the industry can be very difficult though and one way to make it is to set up your own indie games development company and make your own products. That’s what I’ve done and I’ll be discussing how to succeed in the indie games sector”

Jude said: “Games are becoming more embedded in our everyday lives and at Digital 2.0 we develop innovative an engaging gaming experiences that integrate in to our social and work lives. I’ll be explaining to the students at the Game On event the great opportunities in the emerging field of gameification.

Andrew Wilson, a Senior Lecturer at Birmingham City University’s Faculty of Technology, Engineering and the Environment has organised the event with financial backing from Birmingham’s New Technology Institute (NTI). He said: “The games industry is very competitive and difficult to get into, but the University creates employable ‘fit-for-purpose’ graduates due to our fun and innovative courses.

“We make a point of being proactive in working with gaming companies so our courses are as relevant to the industry as possible, such as our BSc Computer Games Technology and the NTI Gamer Camp training event which takes place on an annual basis.”