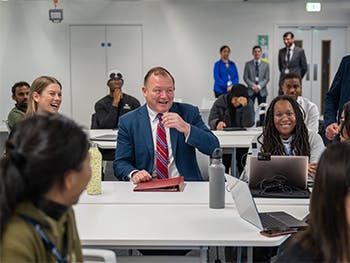 A government minister has praised the achievements of artificial intelligence (AI) and data science students and graduates at two UK universities, following a national recruitment initiative to build a more diverse tech industry.

The Digital Minister highlighted the successful partnership between the government and BCU and UoB’s work to support students from underrepresented groups to study AI and data science and join the UK’s world-leading AI industry.

Earlier this year, the government announced up to £17 million in funding to create up to 2,000 additional AI scholarships for students from low socio-economic backgrounds, as well as women, black students and disabled students to improve the diversity of this growing and innovative sector.

Artificial Intelligence has immense power to boost economic growth and improve people’s lives. We want to see the whole country benefit from the revolutionary technology and these extremely talented graduates, who have successfully completed our government-funded courses, can play a central role putting the UK at the forefront of this exciting field."

Welcomed by West Midlands Mayor Andy Street and senior leaders from both universities, including BCU Deputy Vice-Chancellor Professor Julian Beer, Pro-Vice Chancellor and Executive Dean of the Faculty of Computing, Engineering and the Built Environment Professor Hanifa Shah, the minister and team were given a tour of STEAMhouse, before seeing demonstrations of pioneering AI applications work by BCU and UoB students and graduates.

Professor Julian Beer said: “We are delighted to see expertise from our School of Computing and Digital Technology and STEAMhouse collaborating with industry and to be able to showcase the impactful project work of our staff and scholarship students from our AI MSc course funded by OfS to the Minister and colleagues today.

“As the minister commented, we are a leading example of how bringing together startups, corporate, civic society, and academics results in real-world impact.

new government data shows, the Midlands is now a leading player in global tech and digital innovation, with Birmingham City University firmly at the heart of it - educating and training the workforce of the future and transforming lives in the process.

The visit coincides with the release of new research commissioned by the government which shows the West Midlands is one of the UK’s fastest-growing tech sectors - valued at £15.3 billion, up from £11.5 billion in 2021.

New data indicates that the region is reported to now have over 144,000 people employed in around 2,300 tech startups and scaleups across the West Midlands, with over 56,000 in Birmingham alone.

In a keynote speech at Birmingham Tech Week, Mr Collins encouraged companies to play their part in creating a future pipeline of AI talent by asking industry to co-fund AI scholarships for the conversion courses, saying industry support will get more people into the AI and data science job market quicker and strengthen their businesses.

The University of Birmingham’s Msc Responsible Data Science is a first-of-its-kind programme, which seeks to move beyond training data scientists or IT lawyers, instead equipping legal specialists with a proper understanding of data technologies and their potential social, democratic and ethical risks. The programme will train law graduates and current practising legal professionals with the skills needed to identify these issues and respond thoughtfully to the regulatory challenges they raise.

Professor Karen Yeung, Interdisciplinary Professorial Fellow in Law, Ethics and Informatics, said: “While Law Schools everywhere are now offering students a greater range of 'tech law' subjects, they do not equip them with an understanding of the core technologies, nor a broader understanding of the challenges of technology governance. At Birmingham, we are developing the next generation of 21st-century lawyers, who understand both the fundamentals of data science and the core legal, ethical and regulatory implications in real-world settings.”

Located at the heart of the University’s city centre campus, STEAMhouse is the result of a two-year £70 million renovation and is home to a community of entrepreneurs, academics, students, and creatives, co-working and meeting spaces, state-of-the-art production space and prototyping facilities, a digital hub connecting users with future technologies such as AR (Augmented Reality), VR (Virtual Reality), and 5G testbeds and trials.