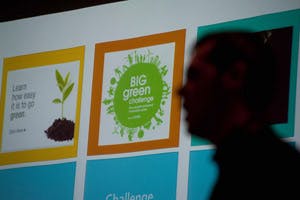 Representatives from internationally recognised blue chip organisations including IBM, Cisco, Microsoft and Citrix gathered at Birmingham City University earlier this month to address the problems of energy and material waste within the computing and technology industries.

Delivered in the UK for the first time, the University hosted the third annual EPSIAE (European Programme for Sustainable ICT in Academic Education) conference, which took place over two weeks from 2 – 12 April.

The ten-day event saw participants and industry experts facilitate discussions on the challenges and opportunities for sustainable technology, as well as recognising the innovations of young professionals in addressing the global issues of climate change.

Funded by the European Union, EPSIAE is formed by an international collaboration of six European universities, including last year’s hosts of the event, Inholland University in Amsterdam.

Rehan Bhana, Programme Director at Birmingham City University’s Faculty of Technology, Engineering and the Environment and Chair of EPSIAE 2013, said: “The ten day programme brought a wealth of knowledge, developments and experience from internationally recognised companies and professional institutes; European University academics and their international participants involved in green ICT to mitigate the challenges faced in the field of sustainability.

“Technologists critically reviewed their innovations and approaches to underpinning problems of energy and resource scarcity in today’s society. It is in the mind-set and attitudes of this generation, who will collectively revolutionise, to evolve a sustainable world.”

The Charted Institute for IT (BCS), the Institute of Engineering and Technology (IET) and the Environment Association for Universities and Colleges played their respective roles in the EPSIAE programme. Other contributing companies include international IT solution company LOGICALIS, Arcola Energy, E.ON, Carbon 3 IT and ATOS, a provider of ICT to the London Olympics.

Collaborations at the event were with Britvic PLC who described the role that ICT plays in achieving business efficiency, as well as APC by Schneider Electric who illustrated the depth of constructing sustainable datacentres and Westfield Sportscars, who are currently working with the University in a partnership developing the world’s first build at home all-electric sports car in support of a growing demand for zero emission racing vehicles.