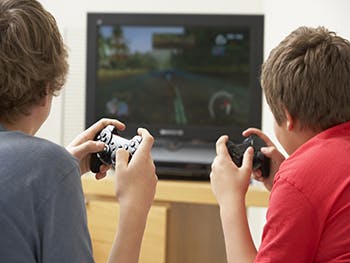 Thousands of game-makers will take part in a 48-hour challenge to create a new hit computer game this weekend, including nearly a hundred in the heart of Birmingham.

Birmingham City University has been named among nearly 300 sites across the globe chosen to host the annual International Game Jam.

Whizz-kids from Birmingham, the Black Country and beyond will flock to the University’s Faculty of Computing, Engineering and Built Environment across the weekend of January 29 – January 31 to take part in the challenge.

A secret theme will be announced at the start of the event and all sites around the world will be given until the Sunday afternoon to create an innovative game which fits the brief.

This will be the fourth time the University has been one of the selected venues for the event after the success of 2011, 2012 and 2015.

Andrew Wilson, Programme Leader for BSc Computer Games Technology, said: “Year on year we welcome more and more participants from both our own students, local universities and from industry to our Faculty.

It’s such a great showcase for the talented game developers that we have right here in the Midlands.
Andrew Wilson

More than 100 game developers, artists and musicians are expected to take part at the University, joining a further 6000 from around the world.

All games developed over the weekend, from around the world, will be downloadable and playable from the global Game Jam website.

State-of-the-art game development software has been donated for the event by special guests Escape Technology who will be joined by industry experts from both Radiant Worlds, makers of SkySaga and Rare Ltd, makers of Sea of Thieves. Red Bull will also be supporting the event throughout the weekend.

Ashley Bass, one of the event’s organisers, said: “We are hoping this will be our biggest and best Global Game Jam to date.”