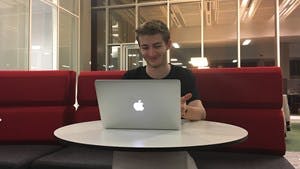 Dan McDonald, a first year Faculty of Computing, Engineering and the Built Environment student, has created a smartphone game, learning how to code it along the way.

Dan explains: “It took me the best part of six months of independent work, working during, and throughout my A Levels, much to my parent’s dismay! Afterwards, I continued on the project in every bit of spare time I got.”

The app, which is called Fireflies, has recently been added to Apple's App Store. In it you play a small owl who swoops high into the night sky, trying to eat as many fireflies as possible.

Dan developed the app with his friends and their busy lives in mind. “Most people don’t dedicate time to their phone, they use them to fill the spaces in between the stuff that actually matters. They’ll use them on the bus to work, standing in a lift, waiting for a friend, it’s those moments I wanted to capture, because they’re just waiting; you can do something with that time.”

The game is easy to play, though more difficult to master. Dan describes himself as a “minimalist” in terms of design and was keen to keep things simple. “The only control in the app is tilting your phone. It’s natural, and intuitive. If you want to move to the right, you tilt your phone to the right. I try to use stuff like that all the time, nobody likes learning the rules; they should come naturally to you.”

Because Dan was learning new coding skills while creating the app, it reads like a diary of his learning. The code starts simple, getting more complex as he becomes more competent and practised.

Dan is building on his self-taught programming skills at BCU, studying for a BSc (Hons) in Computer Games Technology. He names the top thing that he has learnt from the course so far as being how to work collaboratively. “I’m learning in a varied and diverse environment, it’s great for keeping me on my toes. In the second and third year I will learn more about programming and its intricacies, but in the first year it’s about learning to work effectively with new people quickly.”

Dan is keeping his options open for his career after University, but feels that it is important to carry on developing his own work alongside his course. “I think it’s important to be doing stuff whilst you’re at Uni. The old style of graduating, leaving, and looking for a job in the ‘real world’ seems incredibly outdated to me. If you enjoy what you do, it doesn’t really seem like work.”

In the meantime, he has plenty to get his teeth into at BCU. “I like to think that university is a bunch of people working to become good at something. My course is helping me do exactly that.”