Students from the Game Creation Federation Society earned an impressive grand prize after pitching their initiative. They aim to make the society more inclusive. Bethany tells us more about how they did it.

What is the Game Creation Federation Society?

The Game Creation Federation is a student society dedicated to creating games. We wanted to bring people together to learn all of the different areas of game development. We did this by both hosting game jams (24 hour game making sessions) and different workshops on various topics. One of our aims is to bring together people from across the university from different fields and with varied skill sets to explore games development.

What work was involved in winning the prize for your SU society?

We had to create a pitch for an initiative we were planning and present it to a panel. We wanted to work on making the society more diverse and inclusive by bringing together people from different areas of the University, as well as bringing in more females. The initiative we created was the 48 hour ‘DMT Jam’ where 40 people joined together to emulate a games studio and work in teams to create and release an interesting game. People from different departments of the University came together to do this; we had VFX students animating and rigging models, film students making cool cut scenes, art students creating logos and sound students making music and computing students programming the game. It was amazing to be able to bring so many people together to work on something at once.

Can you pick three words to describe the feeling of winning this prize?

Surprising, incredible and happy! We didn’t expect to win as we were competing against many other incredible pitches and initiatives. We were insanely happy when we won as it meant so much to us! 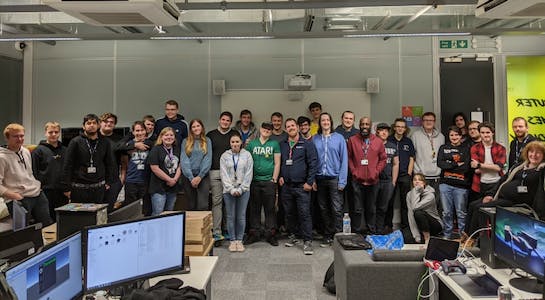 How did you and Jack Hunt contribute to winning the £1,000 prize?

Jack and I thought of a proposal, created a pitch and then performed the pitch to a room full of people. We were both very passionate about the project and worked to make other people feel as excited about what we were doing as we were. Hopefully this will inspire people to take part and want to support the initiative.

How will the Game Creation Federation use this prize money to further develop the society?

The money has gone towards our DMT Jam event which helped attract a crowd of people who had previously never heard of the society. The money has helped our society grow and host an impressive event. It will ultimately help us release some games (one from the DMT Jam) and allow society members to create and share portfolio pieces. Any money left over from the DMT Jam is going towards making our future events more fun and better than ever.

Do you have any advice for other Computer Games Technology students wanting to get involved in the Game Creation Federation society?

If anyone is interested in creating games, a game jam is a great place to start. They are fun events where you’re free to play, learn and meet new people. There is no pressure on what you produce, but if you come along and talk to people I can guarantee you will learn at least something new. We really want people to put themselves out there and take the first step, which is just turning up to an event – it isn’t as scary as it seems! There are so many aspects to making a game and everyone can contribute to something unique and cool.

You can find our society on the SU website or we are on various social media channels (Twitter: @BCUTGCF), so anyone can join or reach out to us if they have any questions.