A race for the big cheese 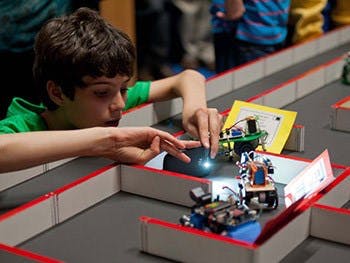 Competitors will battle for the prize of a large piece of brass cheese at the 2015 UK Micromouse competition, where robotic mice race against the clock to find the centre of a rodent sized maze.

Attracting competitors from across the world, including Europe, China and Singapore, it is the fifth year in a row the UK title will be competed for as part of Birmingham City University’s TechFest.

Micromousing can trace its roots back to 1972, when people first started pitting their robotic rodent skills against each other. The first European competition took place in London in 1980, and the event was staged in Birmingham for the first time in 2004, settling down as part of Birmingham City University’s Techfest extravaganza five years ago.

Peter Harrison, Associate Lecturer Computing, Engineering and the built environment and a Micromouse champion said, “Birmingham City University’s Techfest competitions are open to everyone. There are categories for schools, juniors and seniors, ranging from the simpler line-following type through to high-speed maze solvers. Beginners often prefer to start with the drag-race or line-follower, moving on to the more advanced competitions as their skills develop.

“The Techfest competitions attract entries from schools, universities, industry and private individuals, but the big draw is the large brass 'cheese' presented to the winner of the UK Micromouse competition – it is a highly sought-after prize!”