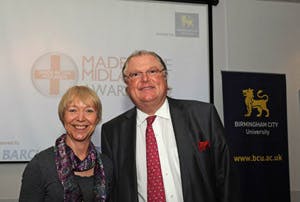 Founded in 2002, Made in the Midlands is a business network representing around 250 small and medium enterprises (SMEs) in the manufacturing and engineering sectors within the Midlands, set up to improve and further the interests of businesses – independent of the public sector.

The 2012 Made in the Midlands Awards was the most prestigious to date, with Lord Digby Jones attending as a guest speaker and presenting awards to members as they celebrated their achievements. Lord Digby Jones said: “Knowledge is the currency of the 21st century, which you can have control of. Innovation is not just invention but a route to market.

“As a country we need to believe in ourselves and we need more skilled people which our friends at Birmingham City University can assist with. I personally would like to make it compulsory for business to link into schools and universities.”

Birmingham City University nominated AGA and Sirus Automotive for awards and were the main sponsors of the event, hosting the ceremony in Birmingham for the first time since the Made in the Midlands Awards were created in 2010.

Professor Mary Carswell, Pro-Vice-Chancellor at Birmingham City University, said: “We were delighted to sponsor this year’s awards and see companies with which we have longstanding successful relationships, such as AGA and Sirus Automotive, receive awards. The achievements of local businesses that were being highlighted were incredibly impressive – both confirmation of the impact these businesses are having on the region and acting as real inspiration to others.

“We’re thrilled to be able to work with members of the Made in the Midlands group to open up opportunities for members to mentor our students, create placement opportunities and graduate jobs within the region.”