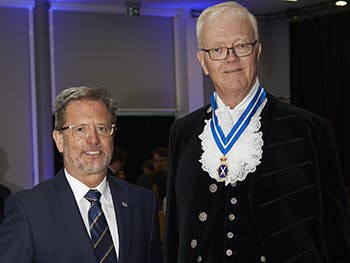 The newly installed West Midlands High Sheriff has been backed to modernise a role dating back more than 1,000 years by the head of the University hosting his first public appearance.

Renowned Midlands business man Dr Bradshaw, was handed to the position during a ceremony at Birmingham law courts, followed by a celebration lunch at the University's Curzon Building yesterday (March 22).

Speaking at the event Professor Allan said Dr Bradshaw would use the historic role and his business expertise to support young people, Birmingham's vibrant multi-culturalism and create future opportunities.

Dr Bradshaw has a strong understanding, and respect for, the vibrant multi culturalism of Birmingham today and the powerful contributions made by all parts of the West Midland’s community – something he will emphasise in the year to come.
Professor Cliff Allan

"Through his spirit of entrepreneurialism and of giving chances to young people, I know he will seek to marry the history of the Office of High Sheriff with creating opportunities for the future.

"His perspective on the role is not to view it purely through the prism of the past but of the here and now too.

"So I think it really does promise to be a year in which Dr Bradshaw shifts the perceptions of this esteemed, but perhaps insufficiently understood role, respecting its history while bringing a dose of modernity and contemporary relevance to it."

The lunch was attended by many of the region's key figures including the Lord Mayors of Birmingham and Coventry, and the Mayors of Sandwell, Walsall, Dudley and Solihull.

The role of High Sheriff dates back as far as the 10th century when Sheriffs would act on behalf of the King as local government officials.

Over the years Sheriffs had also been tasked with running the military - including during the Battle of Hastings - and collecting taxes, but today the position is normally considered ceremonial.

Dr Bradshaw, who lives in the Black Country, co-founded the Listers cars dealership more than 30 years ago.

He said: "One of my main aims will be to work towards addressing the issues of social cohesion in our communities.

"The Birmingham I remember is in every material respect different today, but we are now the youngest city in Europe with a fabulous mix of cultures and what many people now regard as a vibrant 'can-do' approach.

"The only problem is that we are not getting this message across and it is worth noting that this dynamic extends across the entire region.

"I am looking forward to working closely with the University's students, to support them in any way possible and provide them with opportunities to meet with professional business, political and academic leaders working in their chosen fields."