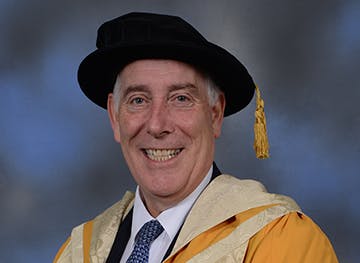 The man at the top of budget brand Poundland revealed that teachers said he would ‘never make anything of his life’ as he picked up a top university honour.

Nuneaton born Jim McCarthy, who grew up in Birmingham, was awarded an Honorary Doctorate by Birmingham City University recognising his outstanding achievements in business, during a ceremony held at the city’s Symphony Hall.

McCarthy’s career spans 40 years, including 10 as Chief Executive of Operations for Willenhall-based Poundland, but said his headteacher had low expectations for him after leaving school before finishing his A-levels.

I decided to leave St Phillip’s (Birmingham) at the age of 17, part way through my A-levels with the words of the Headmaster ringing in my ears. ‘McCarthy, you will never make anything of your life.’
Jim McCarthy

“Now I can’t say that this drove me on to perform any better. But I certainly never forgot it.”

He took the role of CEO at Poundland in 2006 and recently oversaw their acquisition of 250 99p Stores.

Speaking on receiving his Doctorate Mr McCarty said: “I thank all those who selected me for this honour. To say I’m flattered and delighted would be a significant understatement, I am very grateful and immensely proud.

“Of course it is a regret that remains with me to this day, that I did not go to University.

“It seems to me that it is now more important than ever, to maximise your potential with the significant benefit of a university education.”

Graduating alongside him were students from the University’s Business, Law and Social Sciences Faculty.

Mr McCarthy added: “Good luck and good wishes to all in this room, especially the students who are such an important part of our future.”