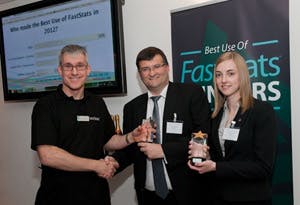 A student from Birmingham City Business School has earned praise from colleagues at her placement company for her part in helping to win a national award.

Marketing, Advertising and PR student Gemma Brittle spent a year on an industrial placement at PDSA, the UK's leading veterinary charity, as a Junior Marketing Analyst and was offered to stay on a part-time basis while she completes her final year at Birmingham City University.

Gemma entered a project that she had been working on during her placement year; into the FastStats User Group Conference 2012 held by Apteco. Organisations from across the county enter into the “Best use of FastStats” category, which is a highly regarded national award for companies to be able to enter their work as an example of the best use of the faststats software, a tool used to manipulate and analyse data within a companies database.

The case study put forward by Gemma, on behalf of PDSA, went on to win “Best Use of FastStats 2012.” Apteco concluded that PDSA’s use of FastStats enabled the company to:

Gemma said: “I had a fantastic time while on placement at PDSA, where I was given lots of opportunities to get involved with key projects, helping me to gain valuable skills and experience.

"I would highly recommend the placement to other students as the organisation and marketing team that I worked with on placement were extremely supportive and helpful, providing me with some invaluable advice and training.”