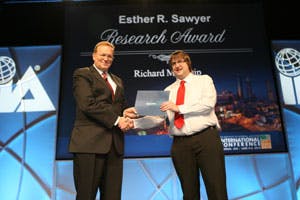 A part-time Masters student has won an internationally-acclaimed auditing prize.

Richard, who is from Shrewsbury, Shropshire, received the accolade for his essay entitled “Internal Auditing: A new direction in the wake of the financial crisis” which explores factors precipitating the financial crisis, identifies underlying governance failures, and presents opportunities for internal auditors. Although he is studying part-time for his Masters, Richard works full-time as a compliance analyst at financial services provider, Admin Re which is in Telford, Shropshire.

The prize was established in 2000 in memory of Esther.R.Sawyer and her contribution to the profession of internal auditing, and as well as receiving an all-expenses-paid trip to the States Richard received a $5,000 prize. The award is open to students currently studying internal audit related qualifications at recognised education centres across the world. The IIA set a topic each year and invite submissions.

Richard, who is originally from Stevenage, Hertfordshire relocated to Shropshire in 2009 for his job. He said: “I think the prize is an excellent addition to my C.V. and will stand me in good stead with my current employer and any future employers. I think the award shows I have a genuine interest in internal auditing and a flair for communicating that via a well-crafted paper. I also hope the award demonstrates my commitment, in voluntarily writing and submitting this paper in addition to the assignments and exams required by Birmingham City University. I think the course at the Birmingham City Business School is very good and I would definitely recommend it.”

Professor Robin Pritchard, Head of Centre for Internal Audit, Governance and Risk Management said: “This demonstrates the significant contribution that the Centre is making in terms of the learning and career advancement of its internal audit students who receive so much more than just an academic experience. This represents the second time in five years that one of our students has won the prestigious award – we are very proud of Richard’s success which shows clear understanding of the impact that the internal audit professional should have in today’s organisations.”