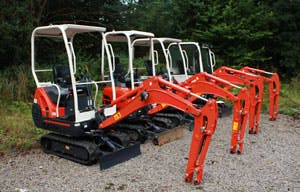 The government needs to spend more on public infrastructure, to help prevent small construction firms going to the wall.

That’s one of the conclusions of research conducted by two Professors at Birmingham City University. Professors Gary Holt and David Edwards from The Centre for Business Innovation and Enterprise at Birmingham City Business School, have been studying the effects of on-going economic downturn among construction business supply chains. Their research has looked mainly at small-to-medium sized enterprises (SMEs) that rely on mechanised plant and equipment - such as excavators, loaders and dumpers – to carry out their work.

They point out that smaller construction businesses often hold significant investment in plant and equipment, as a way of improving their productivity and sustaining higher output. But, physical assets require high levels of utilisation to justify such investment and for many firms, this is no longer possible due to downturn in demand. What is more, there is little profit to be made from work that is currently available. The result has a very direct effect on the future existence of these firms, the professors assert.

Professor Holt said, “On-going negative economic pressure is causing financial instability among smaller construction businesses and equally, putting strain on supply chain relationships as firms fight it out in a cutthroat market, to try and secure work and maintain cash flow. We have discovered that many firms who rely on plant and equipment to execute their work activities are in some instances not even charging the use of this to clients, in an effort to trim tenders to the bone and win contracts”. This, the professors are keen to emphasise, is an unsustainable situation.

They suggest a two-pronged remedy to help address many of these plant utilisation and supply chain issues. First, by way of increased government investment in roads, schools and other forms of public infrastructure; and second, through improved corporate tax incentives for new plant and equipment purchases. They point out that regardless of the present economic climate, the UK needs infrastructure investment if it is to remain a strong economic player into the 21st century, “…so in that case, let’s do it now and help these struggling businesses…” Professor Holt argued. They suggest their remedy would buoy up construction demand, help bring profitability back to the sector and encourage investment in mechanisation.

Professor Edwards said, “This may seem a contradictory standpoint in the face of present austerity measures. But the alternative is to continue to witness a sector of the UK economy that is ripping itself apart; is losing highly skilled people from its workforce; and is in many ways going backwards rather than enhancing its future ability – in part through mechanisation – to produce its products efficiently and at best value”.

The professors’ data indicate that new sales of 9 of the top-ten selling off-highway plant items within the UK, witnessed a severe decline following the onset of global financial crisis and subsequent UK recession circa 2007. But they point out that construction’s business problems exceed this lack of investment in mechanisation alone.

They highlight that clients are ‘using’ the present economic conditions to get construction work done for absolute minimum capital outlay. But, the resulting pressure on subcontract SMEs to reduce tender sums, encourages shorter project durations which in turn leads to corners being cut. For example, in terms of quality of constructed products and poorer health and safety conditions for construction workers.

In short, the professors argue that to ignore these problems now, especially the issue of declining investment in construction mechanisation, will be at the peril of our national economy later.