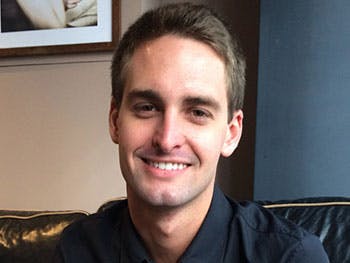 The founder of the controversial app Snapchat has been voted by students as the most influential new media figure under the age of 30.

Spiegel, 24, co-founded Snapchat in July 2011 while studying at Stanford University. In August 2014 the company was valued at $10 billion.

He has been invited to receive a special award from students at Rethink Media 2015, a new media event being held by Birmingham City University on 18 March.

The founder of micro blogging site Tumblr David Karp was the second most influential figure according to the audience of 15-24 year olds polled at a Gadget Show event hosted by the University last month. UK YouTubers Tanya Burr, Zoella and Alfie Deyes – with more than 12 million subscribers combined – also made the top 20 of the poll but trailed behind Jamal Edwards, the 23-year-old owner of online music video company SBTV.

More than 100 million people use Spiegel’s Snapchat each month to send a photo to a friend, with users able to control how long the picture can be seen before the image disappears.

The short-lived nature of the technology made global headlines in October when hackers intercepted messages and posted some often explicit content online. Snapchat said the problem was solely down to users employing third party versions of their app and that its servers weren’t breached.

The Under 30 Power List was unveiled ahead of the Rethink Media event in March, presented by The Gadget Show’s Jason Bradbury and featuring speakers including Google Director Frank Golding who will discuss the changing nature of multi-platform content provision.

Last year’s event included the exclusive announcement from BBC Radio 1 Controller Ben Cooper that 1Xtra Live was to come to Birmingham in November 2014.