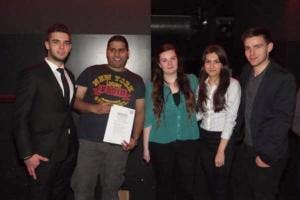 Students from the University have been named as winners of a competition to find Europe’s most entrepreneurial students.

The European Business Masters Cup (EBMC) challenges participants to a set of management simulations where they must think, act and respond in the most effective way possible.

Students Laura Attwell, Vladina Chira, Andrei Tiu, Jeremy Cooper and Osman Malvankar battled it out against rival universities in a series of simulation challenges to mastermind the fortunes of a fictitious company.

The team from the University, who had already won the UK leg of the competition, headed to Stuttgart for the European final which was officially opened by Professor Alexander Roos, Rector of Stuttgart Media University (HdM)

After two days of intense but friendly rivalry with universities from Austria, Germany, Scotland, and Hungary the competition was won by a team including Business School student Vladina Chira. Vladina said: “It’s been an incredible experience. I’ve learnt such a lot in just a couple of days and I’m looking forward to applying it.”

“All the participants relished the experience and international working. The EBMC is just one example of the entrepreneurial games and programmes that are facilitated and run by the Innovation and Entrepreneurship team for the benefit of University students, graduates, alumni and staff.”

Dr Hartmut Rösch, from Stuttgart Media University, facilitated the heats in each of the participating countries and the final. He said: “Every year the competition gets better and better and this year is no different. This has been the closest final yet. I didn’t know until the very end of the competition which team would be announced as the winners.”

To find out more about the EBMC, enterprise programmes or other offers that are available from Innovation and Entrepreneurship contact Ron Brown or email enterprise@bcu.ac.uk.