Business student speaks about diversity at the House of Lords 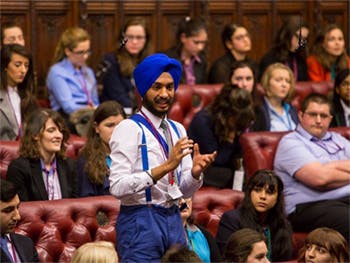 Jaspreet Singh, a third year Business and Human Resource Management student, has spoken at the House of Lords, contributing to a debate on the subject of 'How to increase the diversity in Parliament'.

Jaspreet attended the event as part of leadership programme ParliaMentors, where teams of university students of different faiths and non-religious beliefs collaborate to create social change, while being mentored by a local MP.

Jaspreet explains: "I got involved in ParliaMentors programme after seeing an advert on the Students' Union website. After submitting a successful application I secured a position on the programme, along with four other students from the University."

Jaspreet argued to improve the current process for engaging with diverse communities: "I said that the political parties play an important role in engaging with communities that actually need to be represented. The most cost efficient and time efficient way of increasing the diversity in the parliament is through engagement."

Jaspreet enjoyed visiting the House of Lords: "It was a great experience, especially being an international student. I have never been to the assembly house of my state in my country but it was a great blessing to visit and enhance my intercultural and international outlook.

As a business student I got a deep insight into the world political system.

Jaspreet hopes that being involved in ParliaMentors will be of benefit in the future: "I want to work in Human Resource Management sector and have very big dreams. I want to start a world level campaign which will aim at uniting the differences within the various communities and bring all people on the same grounds to respect each other’s cultures, religions and views.

"Hopefully if I get indefinite leave to stay in the UK I will be running for MP or councillor in the coming 10 years."

Watch Jaspreet's section of the debate, at 16.24 minutes