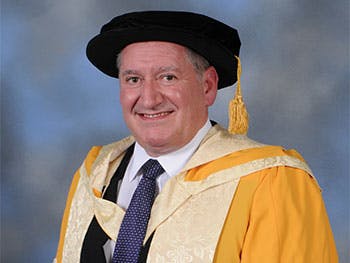 The award-winning boss of a top financial services provider says Birmingham business leaders should look for opportunities in changes to the global economy sparked by China's falling markets.

Craig Errington, Chief Executive of Birmingham-based mutual Wesleyan spoke yesterday as he received an Honorary Doctorate from the University.

He said as part of a world economy we couldn't ignore what was going on elsewhere but that people often focused on the potential difficulties when these changes also presented opportunities.

Wherever there is a threat in the world, it could have a potential impact here in Birmingham and the wider UK. People can become so fixated on the threat that they forget to look for the potential opportunities but where there are difficulties there are also clouds with silver linings.

Wesleyan was founded in Birmingham in 1841 and is a specialist financial services provider for doctors, dentists, lawyers and teachers.

Craig, who has spent more than 20 years working for the company, became Chief Executive in 2005 and helped Wesleyan buck the trend during the economic downturn. It has continued to grow and now has more than £6 billion of assets under management.

He added: "It is important to understand what is going on out there but we have to use that information to our advantage and improve our position.

"Many organisations reacted to satisfy the market and made decisions because the market expected them to do so.

"As a mutual we were able to make the right choices based on the needs of our clients rather than bow to pressures from stakeholders.

He was presented with his award during a ceremony held at Birmingham's Symphony Hall on Tuesday afternoon (1 September) which also honoured graduates from the University's Faculty of Business, Law and Social Sciences.