Business leader to be honoured at University awards ceremony 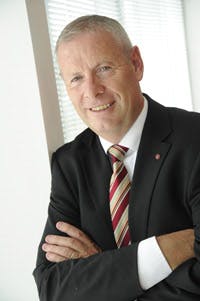 Peter Hindle MBE is General Delegate for Saint-Gobain in the UK, Ireland and South Africa. The world leader in manufacturing and distributing construction materials, Saint-Gobain operates from over 64 countries and employs 190,000 people. In the UK and Ireland some of the best known companies in the construction sector are part of the Group, including Jewson, Isover, Solaglas and British Gypsum.

After a promising cycling career –which included representing Great Britain – was cut short by injury, he began his business career in 1970 with a local independent builders’ merchant, before joining the Jewson chain in 1977. He progressed through the company and was appointed to the role of Managing Director in 1999. In 2000 Saint-Gobain acquired Jewson and in 2003 Peter became Chief Executive for Saint-Gobain Building Distribution UK and Ireland. In 2009 Peter was also appointed General Delegate for Saint-Gobain UK, Ireland & South Africa, which operates from over 1300 sites with turnover of £3 billion.

Peter strongly believes that success depends upon good leadership with a strong focus on helping people to develop. He has been instrumental in championing a range of training courses and development programmes including the industry-leading Foundation Degree in Builders’ Merchanting, and the Postgraduate Diploma in Leadership and Strategy, both developed in conjunction with Birmingham City University. And despite the current economic downturn, Peter has remained committed to supporting these programmes.

He has also made sustainable development a key part of Saint-Gobain’s strategic focus in the UK and Ireland. One major development in 2011 was the launch of the Greenworks Training Academy in Birmingham which provides hands-on knowledge of sustainable product solutions and renewable technologies.

Peter was awarded an MBE in the Queen’s New Year’s Honours list in 2009 for his services to the building industry and to charity. This was in recognition of the creation of the ‘together’ charity programme which has raised over £2 million for good causes since it was formed in 2010. Peter was elected as a member of the Cranfield School of Management Advisory Board.

He eceived the award on Monday 13th February at the Awards Congregation ceremony which celebrated the work and achievements of students graduating from Birmingham City Business School.