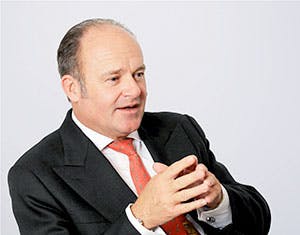 Premium drinks boss and former Chief Executive of the world's leading beverage company, Diageo, will be sharing the secrets of his business success at a public lecture this week.

Paul Walsh helped establish Diageo as a global leader in its field, and led to the organisation being labelled 'Britain's Most Admired Company' in 2008 and 2012 in a peer-reviewed study by academics at Birmingham City University.

Paul became the mastermind behind major company acquisitions and re-positioning which led to the global success of brands such as Guinness, Smirnoff, Baileys and Johnnie Walker. Under his leadership, Diageo has achieved its goal of building a world-class portfolio of premium labels which boasts of leading brands, such as Gordon's, Bells, Dom Perignon, Ciroc, Crown Royal and Captain Morgan.

Having rose from humble beginnings in Manchester, Paul studied accountancy at university and then went on to become one of the best paid corporate chiefs in Britain. Known for his sharp deal-making and decisive nature, he has received international admiration for his ability to build brands.

Diageo's share price has more than tripled during his tenure, growing the market value of the firm from £20 billion to around £50 billion. According to Paul it is company reputation and brand personality which is fundamental for a successful business, which is what allowed him to re-position new 'edgier' products into faster-growing and emerging markets.

Professor Mike Brown, Senior Academic at Birmingham City University, and founder of the 'Britain's Most Admired Companies' study, said: "Paul has been at the helm of Diageo since 1990 and he is aware of the importance of corporate reputation, especially due to the nature of the company. He has achieved the perfect balance between corporate image and brand image, separating and differentiating the two. The University is excited at the opportunity of being able to put this talk on for the public."

Now in its 23rd year, the Britain's Most Admired Companies (BMAC) survey is the only academic study in the UK which measures a company's reputational success on the perceptions of rival companies. In conjunction with Management Today, academics from Birmingham City University's Business School carry out the annual survey in order to help unveil the coveted secret of what it takes to be admired by your closest rivals. This year's BMAC winner will be unveiled in December's issue of Management Today.

Paul Walsh's lecture will take place on Wednesday 11 September 2013, 6 - 8pm at Austin Court, Birmingham. It is free to attend. To reserve your place, email Colleen Bass (Director of Academic Partnerships) or telephone 0121 600 7500.