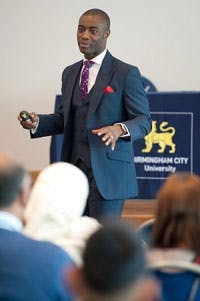 University is about more than just getting letters after your name, according to the first winner of The Apprentice, Tim Campbell.

He gave out the advice during a talk at Birmingham City University on Wednesday 10 May 2011 which was attended by young people from schools and colleges from across Birmingham and beyond. Tim was the speaker at the free event organised by the University called You’re Higher-ed: Inspiration for young business minds: From classroom to boardroom which was designed to encourage pupils in Years 12 and 13 to consider a career in business.

As part of the day, Tim talked about his experience of working in business, starring in BBC’s The Apprentice, and setting up his own company. He won the 2005 series of the gruelling TV competition and proceeded to work for Amstrad for two years, the company set up by the formidable Lord Alan Sugar, before founding Bright Ideas Trust, a social enterprise which encourages young entrepreneurs from disadvantaged backgrounds to start business ventures. Set up as a Community Interest Company (CIC), the Trust gives young people greater access to start-up finance, real business mentors and professional services advisors.

Tim told pupils that going to University wasn’t just about obtaining a qualification, it was an opportunity for networking and meeting potential future employers or business contacts. He said: “Nowadays it’s important to go to university for the right reasons. For some people it may make more sense to go to university after they have started a career and they need a qualification to further their work aspirations.”

On the subject of choosing between setting up a business and entering higher education Tim said he couldn’t see why people could do both. He said: “It shouldn’t be ‘either or’. Some people attend university and then go on to set up successful businesses. Starting a business shouldn’t be about wanting to earn lots of money, it should be about having a passion and pursing it.”

The event was attended by a total of 160 students and staff, including delegates from South Birmingham College, Washwood Heath Technology College, Ninestiles School and Cadbury Sixth Form College.

The event, which was organised by Birmingham City University’s Birmingham City Business School (BCBS) also provided attendees with advice and information on topics such as applying to university, personal statements, and student finance. Current students were also be attending to give a first-hand perspective on higher education.

Director of Undergraduate Programmes at Birmingham City Business School, Professor Mike Jackson introduced the event. He commented: “It was very exciting for us as a practice-based Business School to have Tim Campbell, who is seen as an ambassador for entrepreneurship in young people, as a guest speaker. It was a great day and we would like to hold similar events in the future.”