Academic Takes International Scholars on a Voyage of Discovery 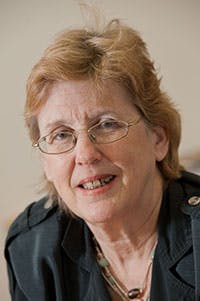 An academic from Birmingham City Business School has spent the start of the summer on a unique teaching experience: an intellectual voyage around Europe based on a boat!

Kathleen Donnelly, a Senior Lecturer in Public Relations, was teaching on 'Coastal Cultures of the West': an 'Enrichment Voyage' offered by the educational organisation Semester at Sea. Traveling around Europe and North Africa, the five-week trip was open to scholars of any age from across the globe who wished to combine a relaxing holiday experience with an educational voyage of discovery.

Semester at Sea has been responsible for the education of international students for over 50 years. Run by the Institute for Shipboard Education in conjunction with the University of Virginia, its main programme of activity focuses on two annual voyages. These offer students the chance to study for a semester in a unique interdisciplinary setting, while traveling around some the world's most exciting cultural sites. In addition, it also offers two 'Enrichment Voyages' per year; short-term journeys that are open to people from all walks of life who would like to combine travel with learning.

Having taught on two semester voyages in 2002 and 2006, Kathleen was eager to teach on one of the programmes again, and leapt at the chance to teach on the Paris to Dover leg of this year's first 'Enrichment Voyage', that started out at Le Havre. She gave a literature lecture on W. B. Yeats in Belfast and then James Joyce in Dublin and Paris; authors covered in her Communications doctoral thesis 'Such Friends', which looked at literacy salon culture in the early twentieth century. Kathleen received a hugely positive response to her lectures from people of all ages and nationalities. At the same time, she also acted as an international ambassador for Communications research at Birmingham City University in a multidisciplinary academic environment.

Kathleen said: "Coming from Pittsburgh, PA, USA, where Semester at Sea was based for many years, and teaching on one of these voyages has been one of my dreams for a long time. It's a truly amazing experience that I'd recommend to both students and academics, and I hope to represent Birmingham City University on another voyage very soon."

Find out more about Kathleen’s trip or take a look at her research blog.