Leading the way ahead into the rural urban fringe and beyond 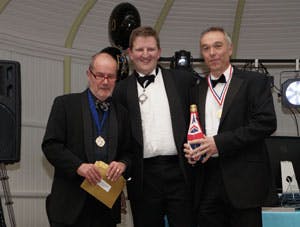 A leading academic at Birmingham City University has received a prestigious award from The Royal Town Planning Institute (RTPI) for his innovative research work on the rural-urban fringe.

The RTPI is the UK’s leading planning body for spatial, sustainable and inclusive planning and is the largest planning body of its kind in Europe. Its role is to generate awareness of the contribution that planners make to building sustainable communities and helping to drive economic wealth. The award reflects Professor Scott’s achievements in the neglected arena of spaces on the rural-urban fringe.

Professor Scott said: “At the core of the research is the idea that the fringe is where ‘disintegrated’ development is at its greatest given the meeting points of town and countryside. Our approach was to boldly go and look for improved ways of joining up projects and initiatives that capture the many faces of development and enterprise; challenging the “single view” solution.”

On receiving the award, Professor Scott said: “I am delighted to receive this award as it reflects my mission to better position academic research with professional practice by breaking down and working across academic and professional boundaries, to get people thinking outside existing silos and to highlight what I see as “forgotten” spaces”.”

The research led by Professor Scott is one of several flagship projects under the Rural Economy and Land Use (RELU) programme, which is funded by Research Councils UK, Welsh and Scottish Governments and the Department for Environment, Food and Rural Affairs (DEFRA). At the heart of all research projects is the pursuit of interdisciplinary agendas to tackle rural problems and opportunities.

“The research brought together people from academia, policy and practice across natural and social sciences and across policy sectors. Crucially it involved us all working as one team from start to finish, learning from each other; I saw my role as being the conductor of a hugely talented interdisciplinary orchestra which played exciting and novel music about the opportunities for the rural urban fringe. The enthusiasm and commitment of this ”orchestra” to succeed was a key ingredient in its success”, added Professor Scott.

The research led by Professor Scott has achieved notable successes with its video policy briefs and RUFopoly learning tool.

Professor Scott said: “Planners have been given a hard press recently. My role in this project merely reflects what good planning practice is all about; facilitating positive change. Here academic ideas within the ecosystems approach and spatial planning have been fused and translated into something meaningful and accessible to the public using the everyday language of values, time and connections within which we can have meaningful discussions about the future of the rural-urban fringe. Research and practice across the built and natural environments collaborating in this way is a real change from people working in their traditional silos and offers rich agendas for the future.”

The innovative approach employed within the research project has also attracted further funding success with £200,000 awarded as part of the National Ecosystem Assessment follow on project. Professor Scott will be looking at how to improve existing tools to deliver better policy and decision making through the incorporation of ecosystem thinking.

Professor Scott added: “Birmingham City University is working in uncharted territory where built and natural environments converge. This is the battleground and opportunity space within which much of the new planning system will operate and it is vital to have more effective tools to manage the different views.

“Our new research grants will give us the opportunity to support planning theory and practice and maximise the impact of positive planning.”