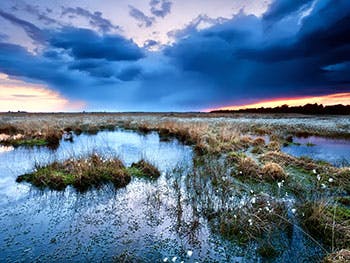 Leading scientists and policy-makers gathered in Inverness today for a conference organised by the International Union for the Conservation of Nature (IUCN), to consider the practical challenge of restoring 1 million hectares of damaged peat bogs by 2020.

Around 70 per cent of peat bogs have been damaged in hills and mountainous areas, mainly by overgrazing, wildfire and drainage. Around 90 per cent of lowland bogs have been damaged, mainly to provide peat for gardeners and horticulture. There are now only 6000 hectares of lowland raised bog in good condition. This isn’t just a problem for the wildlife that live in these places, damaged bogs are a source of climate-warming greenhouse gases and lead to problems with water quality.

Led by environmental organisation Project Maya, the ‘Peat Free’ campaign highlights the environmental impacts of using peat compost and the need to restore peat bogs across the UK.

Mark Reed, Professor in Interdisciplinary Environmental Research at Birmingham City University, said: "Like most of us, I'm a weekend gardener, and for the majority of gardeners like me, there really is no excuse not to use peat-free compost. And yet most people I meet have no idea of the damage caused by buying peat-based composts.

"For me, peat bogs are a fascinating place to think about our relationship with nature. So many of us overlook peat bogs as bleak, featureless and inhospitable places, without realising that we all depend on them for the water we drink and for regulating our global climate. Most of us don't even notice the internationally important species and habitats we're trudging through when we go hill walking."

UK gardeners make a significant contribution to improving the environment for nature; growing flowers that are perfect for pollinators, along with fruit and vegetables, saving on packaging, and carbon used in transportation. Yet, each month UK gardeners are using enough peat to fill the equivalent of 69 Olympic swimming pools, with no idea of the damage they are causing by doing so. An average 100 litre bag of peat compost takes around 100 years to develop. In this time, a bag this size will have absorbed as much carbon dioxide as you would emit by driving from London to Birmingham and back in a petrol VW Golf.

“Most amateur gardeners wouldn't notice a difference in the performance of peat versus peat-free composts, but switching to peat-free would make a significant difference to our peat bogs”, said Professor Reed.

“The Government has set a target to phase out the use of peat by amateur gardeners in England by 2020. They are monitoring peat use and will be reviewing progress next year to see if ‘additional policy measures are necessary’”.

A fifth of Scotland is covered in peat, and the Scottish Government has been actively restoring its mountain and hill peats, which have been damaged by over-grazing and wildfires.

The Scottish Government has allocated £6.7m to restoring peat as part of its “Peatland Action” programme. They are currently consulting on a National Peatland Plan to restore and protect peat bogs, and communicate their wider benefits to the public. This is a vision shared by Environment Ministers from across the UK who signed a joint declaration in 2012 to co-ordinate action to restore peat bogs.

Professor Reed explained the importance of this work: “Peat bogs are a vast green lung that provides unique places for recreation and habitats for some of our most threatened wildlife, whilst absorbing carbon dioxide from the atmosphere. An area of healthy peat bog the size of a rugby pitch can absorb the equivalent of four return trips from London to Edinburgh by car every year. That's approximately four times more efficient at carbon absorption than a forest.”

The ‘Peat Free’ campaign has already attracted wide support from organisations and high profile individuals such as: