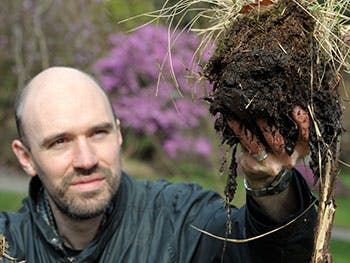 A new Government backed code which could slash UK CO2 emissions by 220 million tonnes and protect rare wildlife by restoring moors, bogs and mires is set to be launched.

The Peatland Code will be unveiled at the World Forum for Natural Capital in Edinburgh this morning (Monday November 23) following a successful two year trial, which has seen businesses fund peatland restoration projects in southwest England, the Lake District and Wales.

The Code is based on research by academics at Birmingham City University and the University of Leeds which revealed that sustainable business investment could reverse the degradation of peatlands and significantly cut greenhouse gas emissions.

UK peatlands, which are wetlands made up of decomposed plants, currently lock away more than three billion tonnes of carbon, are the habitat of rare wildlife and act as a natural filter to drinking water - but over 80 per cent have been damaged.

The Peatland Code sets out key environmental guidelines and has been drawn up by the International Union for Conservation of Nature’s (IUCN) UK Peatland Programme.

It targets the restoration of one million hectares of peatlands over the next five years and these restored sites alone could save 220 million tonnes of CO2 by 2050.

It also offers detailed carbon reduction statistics for organisations investing in pre-approved projects so they know the real-world environmental benefits of their funding.

Professor Mark Reed, who led research at Birmingham City University, said: “The call of a curlew or cotton grass quivering in the wind are sights many of us may associate with our often solitary, yet beautiful moorland landscape.

We remain blissfully unaware or unappreciative of the many benefits we derive from these unique peatland habitats.
Professor Mark Reed

The research has won awards for its impact, including a commendation earlier this year from the Higher Education Funding Council for England as part of its Research Excellence Framework, for demonstrating "very considerable impacts in terms of [its] reach and significance".

Prof Joseph Holden, who led research at the University of Leeds, said: “The peatlands of the UK are our own version of the Amazon rainforest. They need to be protected. They are home to some of our rare and endangered wildlife.

“They also act as a huge store of carbon, with perhaps as much as 3.2 billion tonnes, greater than the amount of carbon soaked up every year by all of the world’s oceans combined.

“The UK’s peatlands are also important source areas for the provision of clean drinking water while protection of many of our peatlands may reduce flood risk."

Peatlands cover around 10 per cent of the UK and store more than 20 times the amount of carbon as all the country’s forests.

Clifton Bain, Director for the IUCN UK Peatland Programme, said: “The Peatland Code provides the business community with a chance to lead on a sustainable approach to our planet.

“Currently the Code has been stringently designed with carbon benefits in mind, but it is very much a flexible approach, with the ability to later adapt to showcase the additional benefits of peatland restoration as knowledge in this area grows, and if required, fit with future Government work on natural capital and greenhouse gas accounting.”