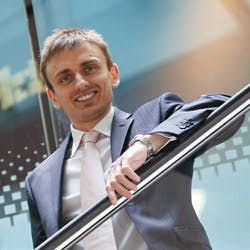 A property expert behind iconic Birmingham developments including The Mailbox and The Cube is to be honoured at a Birmingham City University graduation ceremony next week.

Neil Edginton, from Solihull, graduated from the University’s School of the Built Environment in 1999 with a degree in town planning and is being honoured on Tuesday 12 February as one of the University’s Alumni of the Year in the Enterprise and Innovation category.

After securing his first job with surveying company Silk and Frazier (now Faithful and Gould), Neil later returned to Birmingham City University (then known as University of Central England) to complete a Master’s degree in Construction Project Management, supporting his roles working on three major city developments in Birmingham.

Neil said: “Completing the Master’s course and working at the same time meant I could put the different knowledge I learned into context.”

In 2000, Neil was approached to work for Birmingham Mailbox Limited, going on to join their board of directors in 2003. In 2004, Neil was a founder director of Birmingham Development Company, the company behind The Cube, adjacent to The Mailbox in Birmingham City Centre.

“I started out as a young project manager and ended up as a developer at The Cube,” said Neil.

“I played a big part in the development of The Mailbox but I played an even bigger part with The Cube. It was a massive building and a big role, from setting up the development company from scratch and then setting up a second business to carryout the construction,” added Neil.

“The University course gave me a thorough grounding for life in the property world. I refer to the course every day – not the content of the textbooks but more the experiences we enjoyed and how we learned to solve problems and work with people to find solutions – you draw on that all the time without even realising it.”

Neil’s next move was to set up on his own as EDG property, a development and consultancy firm founded in 2010. The company’s current major project involves the redevelopment of a listed former adult education centre in the Birmingham suburb of Harborne into several premium restaurants, a cookery school and apartments.

Neil said: “In February 2013 it will be the time everyone in Harborne is waiting for, when we start the external building work, with the first phase of the development due to be completed by the end of 2013.”