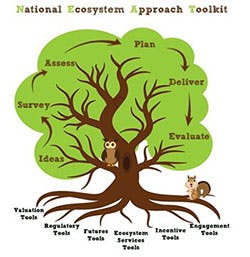 A national environment research project, with contributions from Birmingham City University, will today be launched by Lord de Mauley, Parliamentary Under Secretary of State for natural environment and science.

The event in London on Thursday 26 June will see academics, policy makers and members of public, private and voluntary sectors gather for the launch of the UK National Ecosystem Assessment Follow-on (NEAFO) project, a major new piece of interdisciplinary research advancing knowledge of nature and its benefits for society.

The UK National Ecosystem Assessment (NEA), published in June 2011, was the first analysis of the UK’s natural environment in terms of the benefits it provides to society and continuing economic prosperity.

A two-year long follow-on phase (NEAFO), supported by Research Councils UK and the UK Government, has seen further evidence being gathered by academics and policy makers and methods identified for valuing ecosystems to improve decision-making, particularly on the use of land, freshwater and marine resources.

Birmingham City University’s contribution to the NEAFO project, a toolkit dubbed the ‘NEAT Tree’, was recently shortlisted for an award at the Royal Town Planning Awards for Planning Excellence. The University’s developed NEAT Tree is a web portal for built and natural environment professionals to use to mainstream nature more effectively into policy and decision making.

Alister Scott, Professor of Environmental and Spatial Planning at Birmingham City University, said: “Given recent extreme weather events, it’s important that we learn to work with nature to produce multiple benefits for society, the economy and the environment.

“The NEAT Tree web interface provides guidance within accepted steps of a policy or decision making process, signposting the best bundle of tools to help support a particular set of goals.”

The launch will be followed by presentations and panel discussions, including contribution from Nick Grayson, climate change and sustainability manager at Birmingham City Council.

Get more information and watch a live webcast of the event